The Grande Houston was delivered to the Grimaldi Euromed SpA by Yangfan, Zhoushan, China in January and entered service in March of 2020. Although slotted into Grimaldi's Mediterranean / North America service, today marked its first visit to Halifax according to my records. That it has not been here before indicates the current state of the auto industry with plant shutdowns and fluctuating demand. 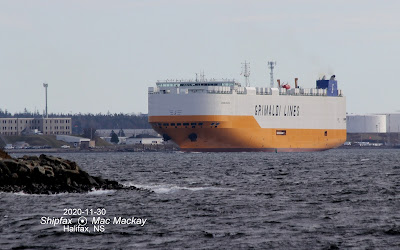 Grande Houston  is the third of seven new ships ordered from Yangfan. The first, Grande Torino has called here, but not Grande Miafiori so far. 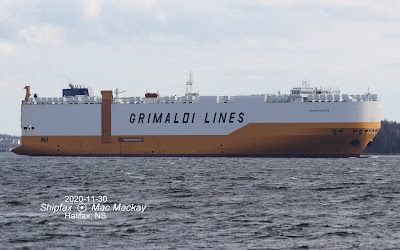 Measuring 65,148 gt, 15,863 dwt, it has a capacity of 7600 CEU and can carry a variety of RoRo cargo using a 150 tonne capacity stern ramp. It is also fitted with the usual side ramp, but these are rarely if ever used in Halifax.

The Grimaldi Group, which also owns Atlantic Container Line (ACL), continues to have bad luck with its autocarriers. Yesterday Grande Europe experienced an engine room fire while en route between Antwerp and Southampton and lost all power. A tug was dispatched to tow the ship. In May 2019 the captain and two other of the ship's officers were arrested on arson charges after two separate fires on the same ship while in Spanish waters. Some crew had to be evacuated by helicopter during the ensuing firefighting. The company however identified faulty car batteries as the cause. [I have been unable to find any further information on the arrests, except that the three were granted bail.]

Grimaldi also had the Hoegh Xiamen on charter when it caught fire in June 2020 off Jacksonville, FL. In that case it was thought that faults in the used cars on board were the reason for the outbreak. In addition the container ship Grande America was lost in the Bay of Biscay after a container caught fire. All these incidents occurred while the Grimaldi Group is in the midst of a $2 billion newbuilding and upgrade program to reduce emissions and increase the efficiency of its ships.

The company has been very proactive in measures to ensure the proper declaration of cargo in containers.