Fidelio in, Sea Horizon out

An arrival and a departure in quick succession late this afternoon, May 30, was in fact a well coordinated operation typical of Halifax harbour where ships move in opposite directions frequently and require planning to avoid conflicts and delays. Arrivals and departures are scheduled to ensure ships pass where there is lots of room, but are also timed to allow the pilot boats and tugs to work efficiently. 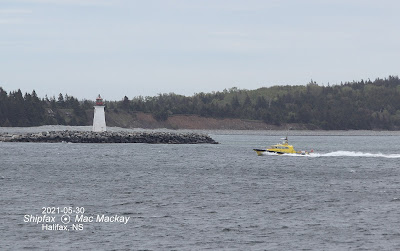 Fidelio inbound still in the traditional Wallenius green and white colours. Built in 2007 by Daewoo Shipbuilding + Marine Engineering Co, Okpo, the 71,583 gt, 30,137 dwt ship has a capacity of 7500 cars. Since officially merging their car carrier fleets Wallenius and Wilhelmsen have adopted a new hull colour of teal green over slate grey. The ships are gradually being repainted as they go in for mandatory surveys and refits. 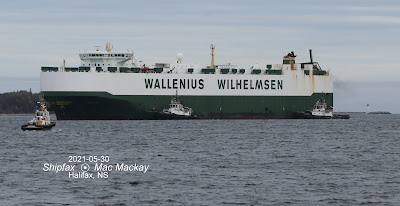 As tugs Atlantic Fir and Atlantic Beaver prepare to turn the ship to back into Pier 31, the pilot boat APA No.1 stands by for the next departure. The pilot boat crew's shift change was made by the fresh (in coming) crew taking the back-up boat APA No.1, allowing the off duty crew time to disembark from Scotia Pilot at their leisure.

The third and fourth tugs, Altantic Oak (aft) and Atlantic Willow (forward) unberthed the tanker  Sea Horizon from Irving Oil's Woodside terminal. The 28,529 gt, 47,149 dwt tanker, built in 2003 by Onomichi Zosen in Onomichi, Japan delivered part cargo to Irving Oil in Saint John last week, and arrived here May 29 to discharge the remainder. The ship will be proceeding to an outer anchorage awaiting orders which are expected tomorrow.

Since there are only four (civilian) tugs based in Halifax, arrivals and departure times also have to take their availability into consideration.

The Sea Horizon streaming outbound for Anchorage B, which is outside the harbour limits and the pilotage zone, but still within the traffic separation zone. When the ship does receive orders it will be able to sail without the need of a pilot. However its movements will still be monitored by Vessel Traffic Services until it reaches the VTS Zone limit.