MSC, the Mediterranean Shipping Company, seems to have become an important caller in Halifax. When their ships diverted to Halifax during the recent longshore strike in Montreal, it was only to be a temporary measure. Since the resolution of the labour issues, the ships have continued to call in Halifax, supposedly only to reduce draft inbound and to top up outbound from Montreal. However judging by the number of containers on trains and the length of stay for some of the ships, it is apparent that they are moving a lot more than just a few extra boxes. 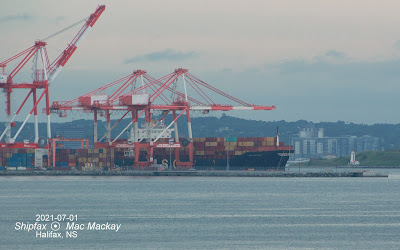 MSC Veronique arrived June 30 from Sines, Portugal and was still working cargo at PSA Halifax this morning. Late this afternoon it moved from Pier 42 to Pier 36 (where there are no container cranes) apparently in no rush to get to Montreal. 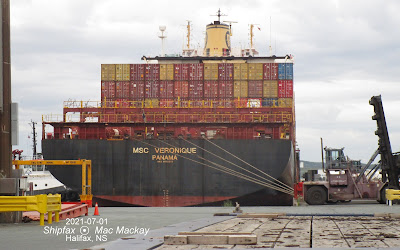 MSC Veronique is an ancient ship by today's standards. Built in 1989 by Maersk's own Odense shipyard in Denmark, as Mette Maersk (one time caller in Halifax) it became 2006: Maersk Merritt, 2007: MSC Sweden, 2010:  Maersk Merritt and taking its current name in 2011.
It is due for a major survey in a year's time, which would normally mean a trip to the scrappers, but in light of current high demand for ships - no matter how reliable - it may well get a reprieve. The 52,191 gt, 60,900 dwt ship has a capacity of 4437 TEU including 500 reefers.
Also arriving today was MSC Mediterranean from Marsaxlokk, Malta. Another classic, but of slightly more recent vintage, it was built in 1995 by the Flensburger shipyard in Germany.

Starting life as the James Lykes it was renamed James in 1996 as the famous Lykes Lines was swallowed up in the CP Ships / Canada Maritime mergers that ended when CP was sold to HAPAG-Lloyd in 2005. The ship became CMA CGM Monet in 2000, Nautic II in 2002 and MSC Veronique Mediterranean in 2004. The stylish sloped fairings on the superstructure were quite avant-garde and were a trade mark of Flensburger. A 29,181 gt, 41,583 dwt ship it has a modest capacity of 2480 TEU.
.