Full out at PSA

It has been a busy few days at PSA Halifax with a steady stream of ships and a cleanup operation thanks to recent snow falls. This morning the ZIM feeder ship Contship Leo had three cranes working to get its cargo moved before the next ship arrived. 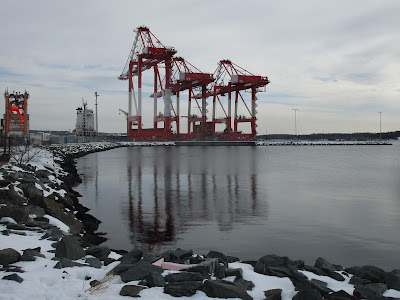 The cranes appear to be considerably oversize for a small feeder ship, but their height and long reach are needed for the next ship. That ship is another "UItra" class vessel, CMA CGM Mexico 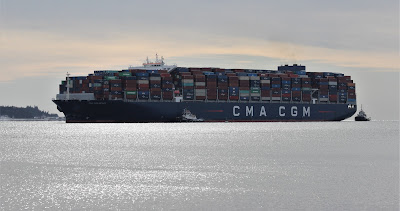 It is a 15,000+ TEU ship that is one of five Argentina class ships. It is owned by Seaspan Corporation and operated by CMA CGM under a long term financing / charter agreement.

Although the ship displays CMA CGM on its side, it is actually sailing for the Ocean Alliance a slot sharing / vessel sharing agreement between three major shipping lines and their subsidiaries. CMA CGM (and its subsidiary APL), COSCO (and its subsidiary OOCL) and Evergreen Marine Corp (EMC) use the ship as part of their independant shipping services.

The large shipping Alliances are under fire from customers with charges of price fixing. Many major US retailers have banded together to charge the lines with pricing collusion in contravention of US competition laws. The three main alliances control a very high degree (some say 90%) of the main east-west trade lanes.

Halifax is also served by THE Alliance which is made up of Hapag-Lloyd, HMM (Hyundai Merchant Marine), ONE (Ocean Network Express) and Yang Ming. The third group is called 2M and consists of Maersk and MSC.

There are still inepedants such as ZIM and ACL, but even they have slot charter agreements with other lines. In fact there are too many of these agreements to list here. However the Federal Maritime Commission has kindly published: FMC List