Update: After all was said and done the rig did not leave this afternoon. Instead it went back to anchor, along with the two tugs. It may go in the morning. Pilots are called for 0900 hrs. 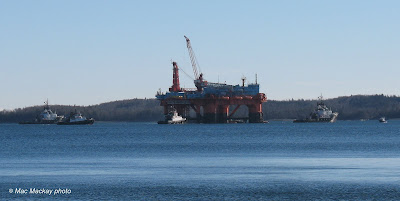 1. Chemul and tugs getting set to go, noontime January 5. 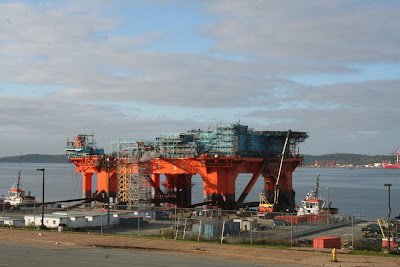 2. Chemul at the Woodside pier in September 2008. The accommodation block was rebuilt and three cranes and much other equipment added.

The offshore rig PSS Chemul is getting underway for the Gulf of Mexico. After a two year $110 million refit, the rig is ready to get to work. Under tow of the two German tugs Pegasus and Centaurus and with the assistance of harbour tugs Atlantic Fir and Atlantic Oak , and other craft, the rig is expected to leave the confines of Halifax harbour this afternoon.
In the top photo, on the far right is the workboat Captain Jim, and not visible behind the rig is the tug Belle D and barge Halifax Carrier, and tug Atlantic Larch, working on the removal of the last anchors.
For more on these tugs and workboats - see Tugfax.
Posted by Mac at 12:55 PM