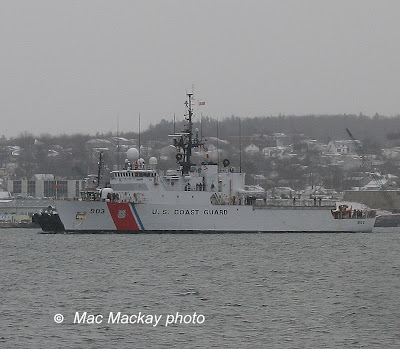 The United States Coast Guard cutter Harriet Lane arrived this morning on a courtesy visit. Assisted by the tug Atlantic Oak it tied up at HMC Dockyard. As a USCG vessel it is treated as a visiting naval vessel, and has a civilian pilot and commercial tug to bring it in.
As with other ships of its class, called the Famous class, it is named for two previous USCG vessels. Its immediate predecessor was also well known in Halifax, particularly during World War II.
The current Harriet Lane has its own web site: www.uscg.mil/LANTAREA/CGCHARRIETLANE/
which tells about the vessel's recent activities. It is based in Portsmouth, VA, but sails out of New London, CT, and ranges widely. Its current mission is nominally fisheries protection.
.
Posted by Mac at 9:11 AM