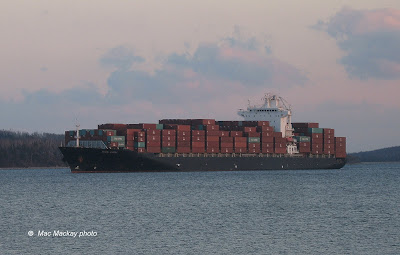 One month and one day after its first visit to Halifax Zim's Pearl River I returned on Sunday January 16. As recounted on December 15 the ship was built as Zim Vancouver. It is the only ship on Zim's rotation without a traditional Zim name. An interesting feature of the ship is the radar scanner on its starboard bridge wing.[ Update: this is clearly an optical illusion - it is more likely a frame for an awning, to provide shelter on the bridge wing]
Originally founded as Israel's state shipping company Zim has been 100% privately owned since 2004. The Ofer Brothers Group are the primary owners and this ship is owned by them. The other fifteen Zim ships on their Global Service that call in Halifax are a mixture of chartered and owned vessels.
In the month since it was last here the ship has sailed across the Atlantic, called in several ports in the Mediterranean and reached the terminal port of Haifa. It has since retraced that route and will now call at ports on the east and west coasts, crossing the Pacific and ending in Busan Korea. It then will reverse that route and return to Halifax about March 30.
Zim's web site has more about the company's history and its extensive schedules at: http://www.zim.com/
.
Posted by Mac at 8:53 AM