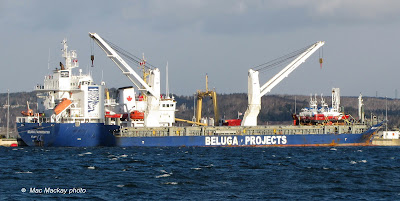 1. Beluga Favourisation shares the BIO pier with CCGS Edward Cornwallis, as it prepares to unload the three lifeboats perched on the bow. 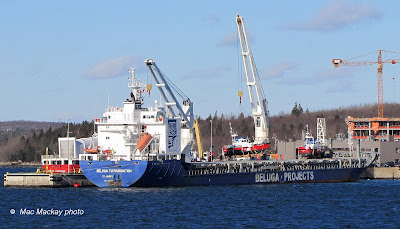 2. Cape Edensaw*is airborne as the crane swings it toward the dock.

3. Atlantic Willow lets go as Beluga Favourisation departs for sea. If the ship's name were any longer, the ship would have to be lengthened to fit it on.

The Bedford Institute of Oceanography is the home of the Department of Fisheries and Oceans fleet and the Canadian Coast Guard ships based in Halifax. It is therefore rare to see a cargo ship tied up at the dock. There was a good reason for last night's arrival of the Beluga Favourisation however.
It was carrying as deck load, three new CCG lifeboats built at Victoria Shipyard in British Columbia. Cap Aupaluk, Cape Rescue and Cape Edensaw*were loaded in Victoria and after a trip down the west coast, transit of the Panama Canal, and a visit to Port Everglades, FL, the boats arrived in Halifax, without steaming a mile on their own.
Each boat, secured in its own cradle, was offloaded by one of the ship's 120 tonne cranes, and landed on the dock.
The ship left this afternoon for Baie Comeau, QC, well laden with a below decks cargo.
The lifeboats are part of a five boat order (the other two are for the west coast) for more of the Cape class boats, in addition to the 24 boat order completed in 2005 by the same yard. The new boats will be stationed one each in the Maritimes, Quebec and Ontario.
I will award a non-cash prize to the first person to correctly locate the points of land that form the capes in the boats' names.
* Incorrectly identified as Cape Dauphin in first version of this post: corrected 2011-02-09
Beluga Favourisation is one a large series of "E and F" class ships built in China for Beluga Shipping. It carries two cranes which can be combined to lift 240 tonnes and is specially designed for heavy and large sized loads. It was built by Jiangzhou Union Shipyard in Ruichang, China and delivered in October 2007. It measures 9611 gross tons, 12,782 deadweight.
See their website for detailed information:
www.beluga-group.com/en/?cHash=23dd5db839dc601741d483be7ccb845e
Posted by Mac at 7:25 PM