2. Gypsum is still weak, but oil is strong. The bulker Alice Oldendorff is inbound to load gypsum on January 10, while the tanker Acor waits her turn for bunkers. 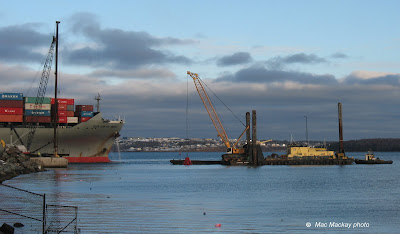 3. The tug Whitby moves the dredge Canadian Argosy out of the way while the K-Line post-Panamax container ship Glen Canyon Bridge berths at Halterm on January 11. A crane on shore is set up with a pile driving leader, ready to start driving tubular steel piles for the pier extension.

The Halifax Port Authority was characterised in today's paper as only cautiously optimistic about the current level of port activity. On a strictly statistical basis this may be the right mood, but in my opinion the Port of Halifax is doing extremely well.
The major tonnage drop in bulk commodities due to a low demand for gypsum in the US construction market, certainly keeps the overall numbers for Halifax low - but only on a tonnage basis. Gypsum is not the major money maker for the regional economy that some other sectors may be.
Weak break bulk cargo activity is nothing new either - occasional spikes in rail imports and low numbers for railway locomotive exports and project cargoes (inbound and outbound) are typical of this sort of "one off" market. Newsprint demand is also way down , but this has never been a huge item for Halifax.
The two other major business areas seem to me to be doing quite well. Petroleum - both incoming crude and outgoing refined product remain strong.
Containers, while they may show lower in tonnage statistics, are really the main focus of the port and this area is doing extremely well - particularly in comparison to such ports as Montreal, which has experienced very sluggish recovery. Containers contribute more to port employment, spin offs and the regional economy than gypsum (for example) so the improvement in this sector is significant beyond strict tonnage terms.
While the final stats for 2010 will not be out until next week, I remain upbeat about the current state and the future.
Major investments in port infrastructure (which are being scaled back in Montreal) seem to be forging ahead here and that is also good news. An example is the Halterm expansion, which is now becoming visible. Preparatory dredging has been going on for some time, and now work has started on driving tubular steel piles. These will be flushed out and filled with concrete. For the next several months, there will be almost daily evidence of the expansion. Similarly the pier 9B face renewal is nearly finished, and the pier 9D work should be starting soon.
All these improvements will make Halifax ready for more traffic (instead of having to catch up as was the case in the past.) While US ports compete with each other for dredging money and no decision is in the offing for the Bayonne Bridge in New York/New Jersey (not to mention the Montreal retrenchment) Halifax seems to be in a strong position and is moving forward, with very good evidence of increasing demand.
.
Posted by Mac at 9:51 AM