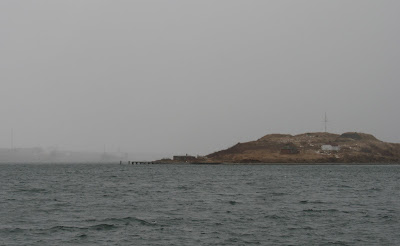 1. The tanker Algoscotia is barely visible at the oil dock from the Halifax side of the harbour. A few minutes later it was a white out.

As a major winter storm approached Halifax, a wall of snow moved up the harbour.
When it's all over sometime tomorrow we will have up to 30cm on the ground, but due to high winds it will be blown around a good deal too.
Shipping so far seems unfazed with several arrivals and departures set for later this afternoon or evening. One ship is anchored off Halifax, but may have to move out to sea depending on conditions. High winds, limited visibility and high water are expected in the harbour.
More details as they become available.
Posted by Mac at 2:51 PM