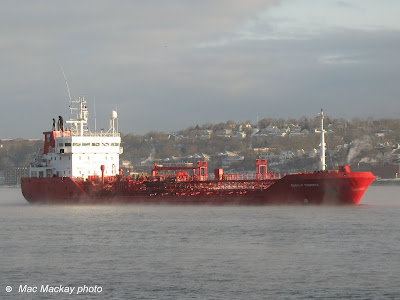 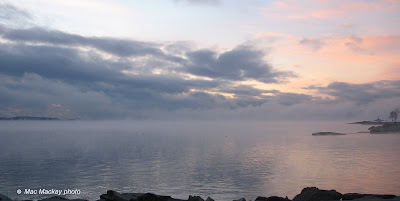 2. HMCS Fredericton is barely visible while anchored at the sound range earlier this morning.

The last remnants of sea smoke were burning off this morning when the chemical/product tanker Dagmar Theresa sailed from anchorage in the harbour.
Air temperatures down around minus 10 degrees C, with water temperatures still above zero combine to form this interesting winter phenomenon. Earlier in the morning, before the sun could warm the air, the sea smoke was so dense that the harbour ferries were sounding their fog signals as they crossed the harbour. HMCS Fredericton, which spent the night at the static sound range off Macnab's Island, was barely visible from shore.
Dagmar Theresa is owned by the Danish shipping company Herning Shipping A/S. It is an offshoot of a family owned oil business, Uno-X and currently operates about forty tankers, mostly smaller chemical / product tankers. This ship was built in 2001 and measures only 2654 gross tons, 4454 deadweight. Its agents while in Halifax to take on bunkers were Kent Line (also an offshoot of the family owned Irving Oil.) Herning has an excellent web site, http://www.herning-shipping.dk/ that lists the fleet and their trades.
Dagmar Theresa now flies the Maltese flag, having recently switched from Denmark, along with many other Danish ships, in reaction to a change to Danish tax laws.
.
Posted by Mac at 9:11 AM