Good Day for a Floatover 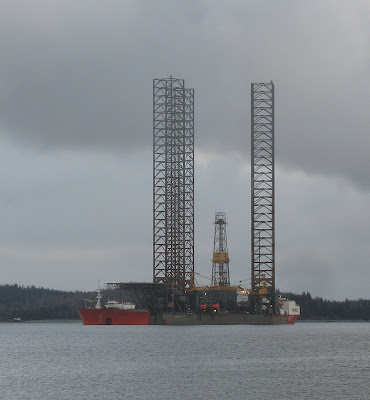 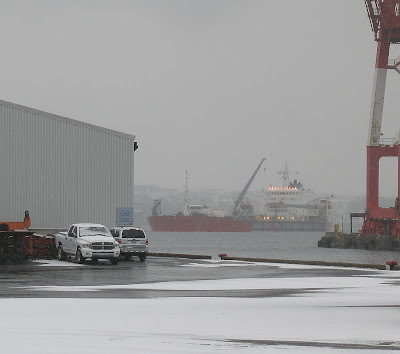 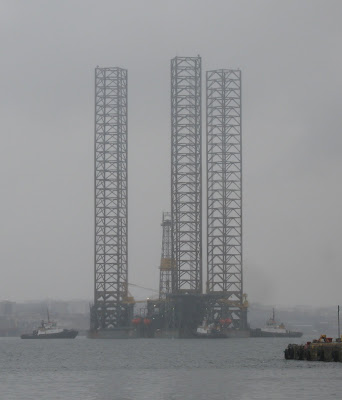 3. Mid-morning: rig underway in control of four tugs (moving left to right in this photo) with wet snow in the air.

Visibility was partly obscured by wet snow, but there was little wind, and so it was a good day to float the jack-up rig Rowan Gorilla III over the Triumph.
The operation started at 0830 when the pilots and four tugs started to move the rig from its berth at the Woodside pier in Dartmouth. The rig's legs were raised from the bottom and it began to float on its own hull. The tugs Atlantic Fir, Atlantic Larch, Atlantic Oak, and Atlantic Willow then moved the rig across the harbour to number one anchorage and aligned it to float over the Triumph.
Triumph was semi-submerged so that its cargo deck was well below the surface. By about 1100 the "float over" started and the rig was in its final position shortly after noon. It took lots of push/pull on the tugs to get it in the exact position to fit between brackets set on the ship's deck.
As soon as the rig was finally positioned pumping up operations started on the ship. This is a slow process and it was not until late afternoon that the ship's deck began to appear above water.
The ship's crew must now make the attachments to secure the rig for sea before they can sail. This is expected to take a day or so. In the meantime gales are forecast, which will probably keep the ship in port until the first of the week.

Triumph was built as the tanker Marble in 1992 by the Brodospas shipyard in Split, Croatia. It was purchased by Dockwise and converted to a heavylift ship in 2008. Dockwise has a large fleet of similar ships, several of which have called in Halifax, that specialize in moving oil field equipment around the world. Their web site has many spectacular photos of their work, which also includes dedicated yacht transport. See http://www.dockwise.com/

Rowan Gorilla III was built in Vicksburg, Mississippi in 1984 by Marathon-Le Tourneau. Owned by the Rowan companies, it is capable of working in water up to 450 feet deep and can drill to depths of 30,000 feet. It has worked in our waters off and on many times over the years. After a 2000 program it was taken to Sabine Pass, Texas where its legs were extended from 343 feet to the present 504 feet.