Wild day in the harbour 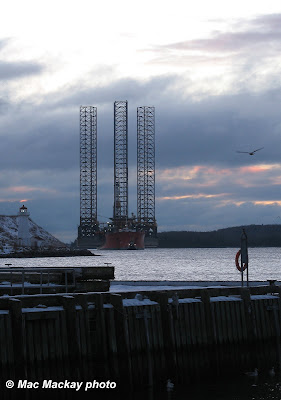 Gales, snow, inconveniences for travellers, but a major headache for the heavy lift ship Triumph.
Yesterday's storm, which dropped a few centimeters of snow on Halifax, brought with it gale force winds, and the Triumph could not keep its position at number one anchorage. They called in tugs to keep the ship head up into the wind. Two tugs attended the ship all times yesterday and through the night - taking turns to allow for crew changes- until conditions calmed down. Even at 0800 this morning, when things looked fairly peaceful, the tug Atlantic Fir has a line up and is pulling to keep the ship in position.
With the huge jack-up drilling rig Rowan Gorilla III on deck acting as a giant sail, the ship's own anchors were not enough to hold it in place. A tracking map on AIS shows the ship moving over quite a large area in the lower harbour.
Other shipping was able to arrive and depart despite the weather, but they had to give Triumph a wide berth as it yawed back and forth.
.