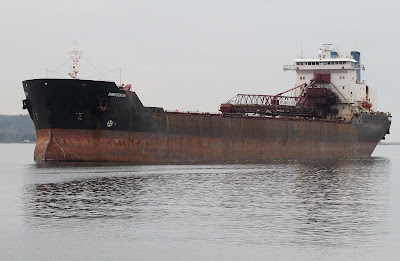 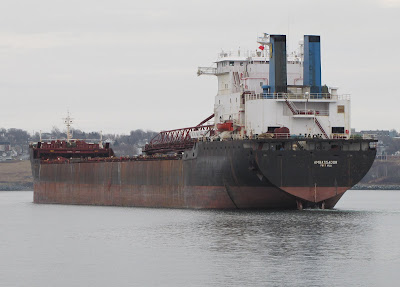 2. Once clear of the island she swings well to starboard to the anchorages. The asymmetrical name on her stern is a result of painting out the word "Canadian" when she was reflagged in 1986.

The self-unloading bulker Ambassador arrived this afternoon to take on bunkers. A frequent caller at National Gypsum over the years, she rarely puts in without taking cargo.
Built way back in 1983 at Port Weller Dry Dock in St. Catharines, ON, her original name was Canadian Ambassador and she was owned by Upper Lakes Shipping. Built to Seaway dimensions, she measured 24,320 gross tons, and was designed for 37,500 deadweight (less at Seaway draft.)
In 1986 she was placed under the flag of Vanuatu (registered at Port Vila) and began to operate internationally. Although usually confined to the eastern seaboard of North America, she has worked overseas too. The "Canadian" part of her name was painted over, but the welded letters are still there on the bow and stern.
When she was reflagged she was given blue funnels with a yellow seahorse, once the funnel marking for Island Shipping, an Upper Lakes subsidiary that operated some ships offshore. However ownership was vested in another UL subsidiary called Marbulk Shipping. In 1997 Algoma Central Corp acquired a 50% interest in Marbulk, then in 2000 CSL International acquired UL Group's 50%.
Since that time the ship has been in the coal/ aggregates/gypsum trades within the CSL International pool, and is operated from CSL International's offices in Beverly, MA. (CSL ships are in turn operated by V-Ships, a Monaco based company.)
The ship had a major refit in Halifax in 1998. Then in 2000 she came back under the Canadian flag for a few months, being renamed Algosea at Halifax Shipyard on April 13. (Because Upper Lakes no longer had an ownership interest in the ship, it was not appropriate to resume her original name.) The ship resumed trade on the Great Lakes until December 21, when she became Ambassador again, being renamed at Trois-Rivières, QC.
Since that time she has continued in the usual trades, and on this trip is en route from Newington, NH (a favourite gypsum offloading port) to Cape Porcupine, NS on the Strait of Canso to load aggregates.
.