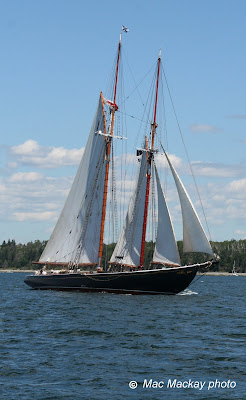 1. Bluenose II, a not particularly faithful replica of Bluenose. 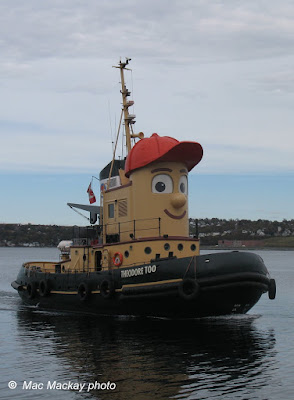 2. Theodore Too, a faithful replica of a model, which was a caricature of a tugboat.
Well the Province of Nova Scotia has really put its foot in it this time. I was trying to stay out of the Bluenose II "restoration" debate, but I guess I will have to wade through the muck with all the rest.
The admirable webcam of the rebuilding has an excellent view of the new stem going in and it looks spectacular. However, the original Bluenose had a very distinctive hook in its stem, which was probably never documented accurately. Various sources suggest it was a modification made during construction. Bluenose II attempted to replicate this, but photo evidence suggests that they did not succeed. Now I see that the new stem makes no attempt at the hook.
So is what they are building a replica of the original Bluenose? No, because the original drawings are not being used, nor was there accurate documentation of builders changes to do so.
Is it a replica of Bluenose II ? More or less, but many changes have been made. It is certainly not a restoration of Bluenose II since none of the its hull is being reused. Bluenose II itself was a superficial attempt at a replica - and would not have been an ideal model for building a new Bluenose in any event. It may be a rebuilding (from scratch) of Bluenose II, so it is really a New Bluenose II.
Maybe it is Bluenose Too, a replica of a replica.
I am sure that what is being built is a superior vessel, even to the original - certainly built of better materials, with more modern means. I am also certain that the best currently available craftsmanship will go into it, and that its fittings and scantlings will be top notch. However the fundamental decision, made before construction, not to model it on the original Bluenose means that it will always be a sort of pastiche. Made up of ideas from two previous vessels, with elements distinct unto itself. It will undoubtedly be a unique and distinctive vessel, and it deserves a distinct identity. It will eventually, after the dust settles, and the recriminations fade, establish its own personality and identity in the pantheon. But what should its name be?
Will it be Bluenose (ii) or Bluenose II (ii) or even Bluenose II 2nd?
Regrettably it will not be Bluenose III (that name has been reserved by the descendants of William Roue, designer of Bluenose.)
It deserves its own distinctive name, certainly referencing its famous ancestor, but also recognizing its own new identity, distancing itself from the problems of the Bluenose II.
Suggestions welcome.
Posted by Mac at 2:28 PM