Gypsum still trickling out of Halifax 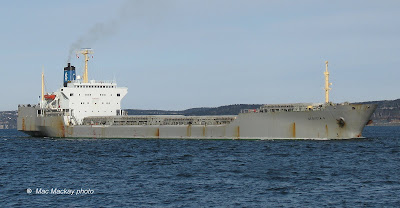 1. Georgia S. with a load of gypsum, leaving Bedford Basin on Tuesday January 25.


With Tuesday's departure of Georgia S it is apparent that some gypsum is still trickling out of Halifax. As the Port's annual report stated, tonnage is way down due to the slump in US construction. All output from National Gypsum's open pit mine in Milford, shipped through Halifax, goes to the US for processing - mostly into wallboard. Georgia S has been running the odd trip out of Halifax, then returning to standby for a year or so.
Not so fortunate is mainland Nova Scotia's other gypsum exporter, Fundy Gypsum (a division of US Gypsum, through its subsidiary USG Canada.) On Tuesday they announced that their operations near Windsor would be mothballed indefinitely, and all but a skeleton staff would be kept on for maintenance. This includes their state of the art storage and shipping facility in Hantsport. The Windsor and Hantsport Railway, which transports gypsum between the mine and the dock, and is an unrelated company, will almost certainly have to close as a consequence. Fundy also operates the tug Spanish Mist at Hantsport (see Tugfax http://tugfaxblogspotcom.blogspot.com/2010/10/hantsport-tug-for-sale.html) which was for sale in the fall, but has apparently been withdrawn from the sale market. As an indication of the magnitude of the slump, export tonnage has dropped from 1.8 mn tonnes in 2006, to 440,000 tonnes in 2009 to 130,000 tones in 2010, according to an article in the Chronicle Herald.
There are also gypsum operations in Cape Breton. USG loads out at Little Narrows on the Bras d'Or Lakes, in a seasonal operation. (The lake freezes over in winter, and shipping operations halt.) There is also a gypsum mine near Port Hawksbury. It is still operational, but at a reduced output. Interestingly two gypsum board manufacturers operate at Port Hawksbury. USG purchased a Louisiana-Pacific board plant and makes abuse resistant panels there. Acadia Drywall of Dieppe, NB purchased the bankrupt Federal Gypsum operation in December and expects to start producing wall board in June 2011.
There is some domestic market for gypsum, but it is limited, and there are competing sources of gypsum (synthetic gypsum from the scrubbers in coal fired power plants is very high quality) and competition from India and China for finished wall board product. Gypsum is also used as a retarder in concrete, but again is highly dependant on the construction industry for business.
Where will it all end? No one seems certain, but until there is a recovery of construction activity in the US it seems certain that gypsum will be in doldrums for Nova Scotia.