(JULY 31 - SEE UPDATE BELOW)
Although Canadian owned, the tanker Algoma Hansa rarely visits Canadian waters. It loomed in out of the fog today and tied up at pier 34, the normal roost of fleetmate Algoma Dartmouth (which shoved along to pier 33 to make room).
Soon several no-name tank trucks arrived alongside, and appeared to be pumping out slops when I caught up with it late this afternoon. 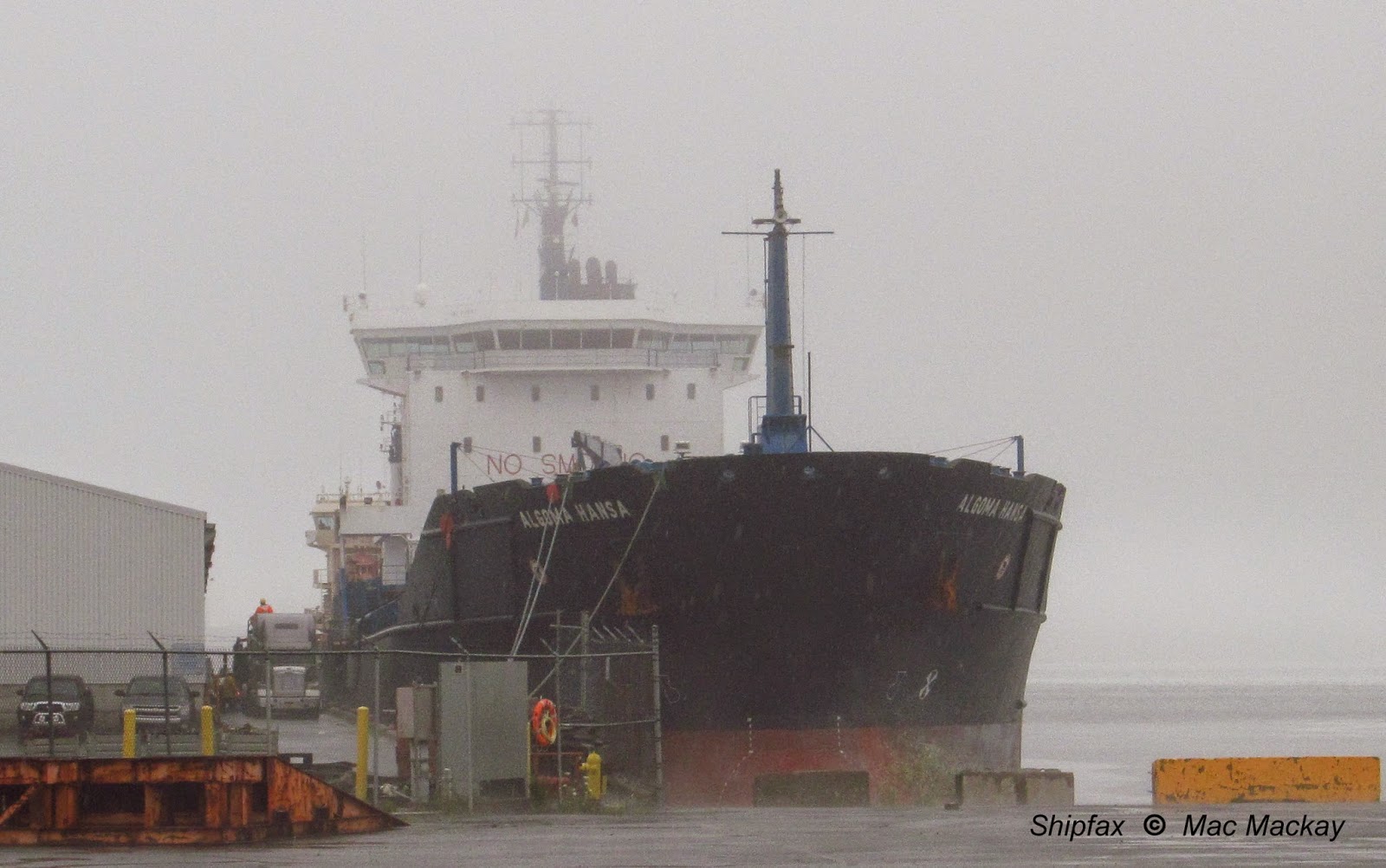 Built in 1998 by Alabama Shipyard in Mobile as Amelienborg it operated for Dannebrog Rederi of Denmark until 2006 when Algoma purchased it and sister Aggersborg. The latter ship was refitted in Halifax and modified for St.Lawrence Seaway service.It was registered in Canada as Algosea and operates for Algoma's domestic tanker fleet.
Amelienborg went into operation for Algoma Tankers International Inc, as the first ship in a new operation,  Hanseatic Pool, jointly formed by Algoma and several European operators. Following difficulties with Chinese shipbuilders*, that pool was wound up and Algoma Hansa, as it became in 2008, joined the Navi8 pool. It now operates within the Navig8 Brizo8 sub-pool. Management is entrusted to Bernard Schulte Ship Management out of Limassol, Cyprus (one of the other  original partners in the Hanseatic pool), and it flies the Bahamas flag. Tonnages are 11,290 grt, 16,775 dwt with phenolic coated tanks.
In 2013, during a regular drydocking, the ship was modified for Seaway service. The work included trimming back its bridge wings and in July 2013 it made its first trip into the Great Lakes.
As Algoma's only non-Canadian tanker (it has several non-Canadian flag deep sea bulk carriers) there has always been speculation about if and when the ship would be "patriated" to Canada. Because it was built in the US it is also presumably Jones Act eligible if it operated for US owners.
There is no sign of it changing flag at this point.


Update: The ship was registered in Halifax July 31, so is now Canadian. We would expect to see a lot more it now!
.
Posted by Mac at 8:55 PM