Post tropical storm Arthur is making its way up the east coast this morning. Until about 0700 it was business more or less as usual in Halifax harbour. However with the arrival of Maersk Palermo the pilot boat was taken off station due to high winds and seas at the pilot station off Chebucto Head.

Although it took some doing, Maersk Palermo was able to tie up at Halterm, with the assistance of the tugs Atlantic Willow and Atlantic Spruce.


Within the relatively sheltered wasters of the harbour, it was still very windy, and earlier arrivals were anchoring instead of tying up.

The general cargo ship Thorco Celebration (ex BBC Brazil -11, Ursula -05, Ile de Re -02) anchored in Bedford Basin off the Rockingham rail  yard. Built in 2002 by Damen Shipyard in Hoogezand, Netherlands, it is owned by Eckhoff Reederei of Jork, Germany and registered in Antigua and Barbuda. With measurements of 7,576 gross tons and 10,300 deadweight, it carries to 80 tonne cranes, port side mounted. Shortly after 0900 it began to drag anchor and called out tugs and a pilot to resecure. However it was able to do this on its own and called off the assistance a few minutes later. 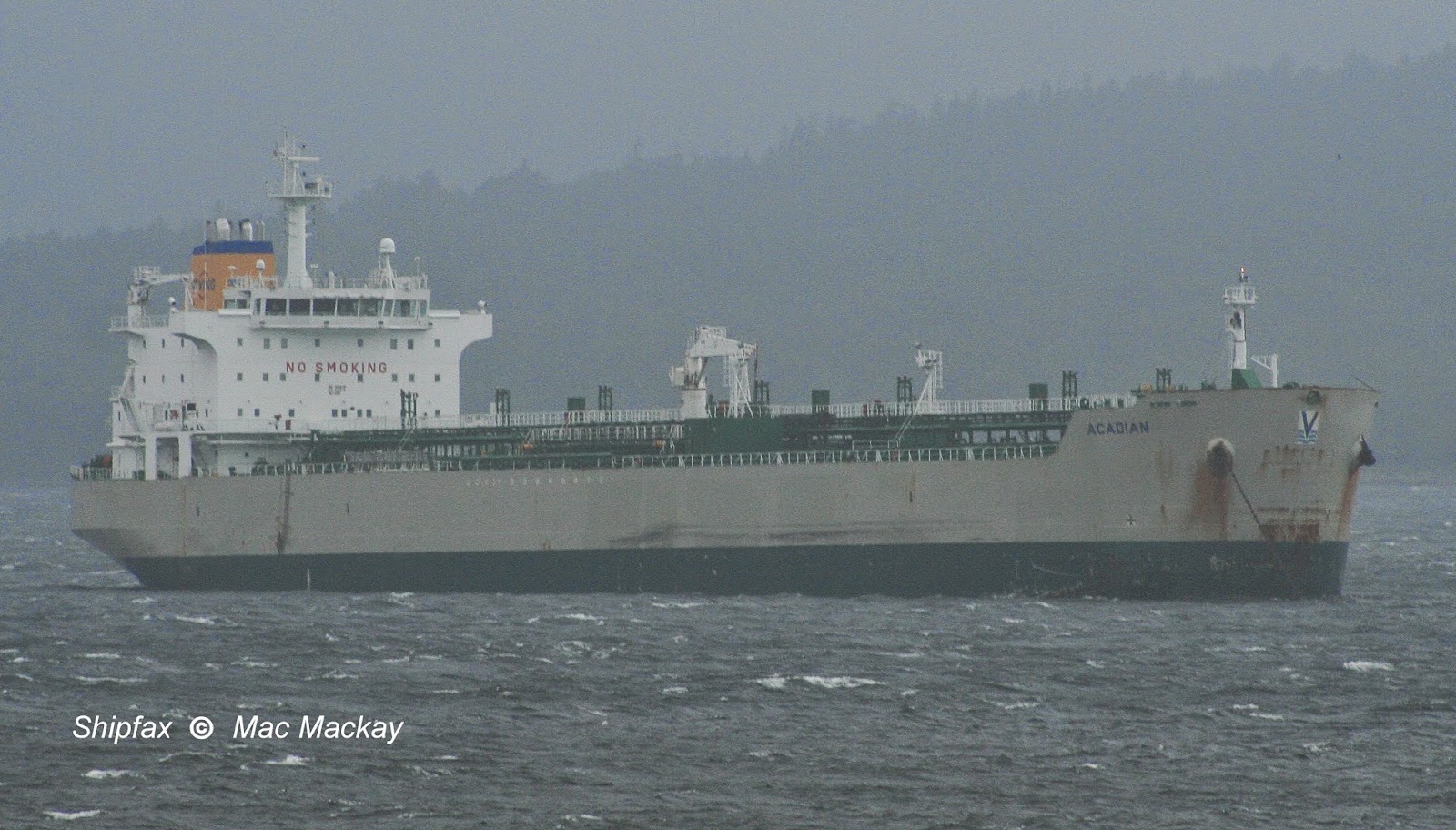 The Irving Oil tanker Acadian anchored farther north in the Basin will remain there until the storm passes and it is safe to tie up at the Imperial Oil dock.

The rather unusual sight of  a Zim ship in the Narrows greeted early harbour watchers.

Zim Texas headed for the north end of Bedford Basin to anchor, with the tug Atlantic Oak.

A number of other boats and ships moved around to more sheltered or safer positions. The visiting French naval patrol boat Fulmar moved off the Tall Ships Quay last night and anchored in the lower harbour.

Against the backdrop of George's Island and Halterm cranes, it is awaiting the start of the annual Halifax to St-Pierre sailing race. Scheduled to start tomorrow, the race may be a wild and wooly one.

The supplier Panuke Sea also went to anchor in the Basin and the bunkering tanker Algoma Dartmouth moved to pier 9A yesterday afternoon. Also sheltering in port, the tugs Beverly M 1. Atlantic Fir , supplier Mainport Pine and seismic ship Western Patriot - all from Shell Oil's seismic project, and the cruise ship Pearl Mist were all hunkered down at their berths at the deep water piers. The general cargo ship Beauforte has been in all week at pier 27, and it remains there, in the lee of the adjacent finger piers.. 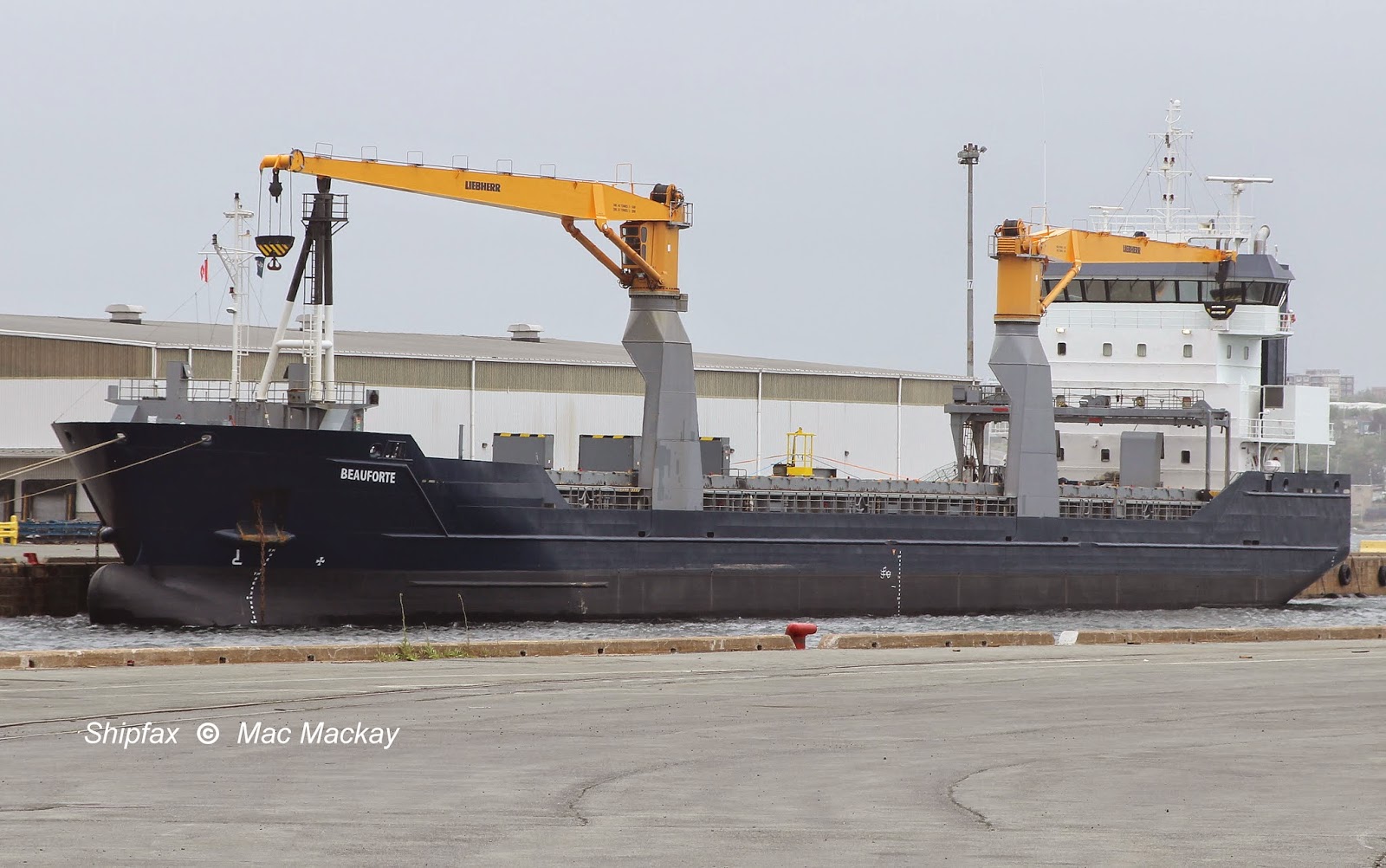 Built in 2011 by Damen Shipyard in Bergum, Netherlands, it is operated by Focus Shipping of Sneek, Netherlands. Carrying two 40 tonne cranes, it measures 5425 gross tons, 8273 deadweight tonnes. Beauforte arrived June 29 with a cargo of rails from Poland. It appears that unloading has been completed, and when it sails its place will likely be taken by Thorco Celebration.

At the Bedfford Institutre CCGS Sir William Alexander, Edward Cornwallis and Alfred Needler are tied up along with the newly delivered CCGS M.Charles M.B.

The pilot boats moved to Jetty November Lima but remain on standby in case of emergency.

As of 0900 the ferry Woodside I was still operating between Halifax and Dartmouth, although it looked like a bumpy ride. 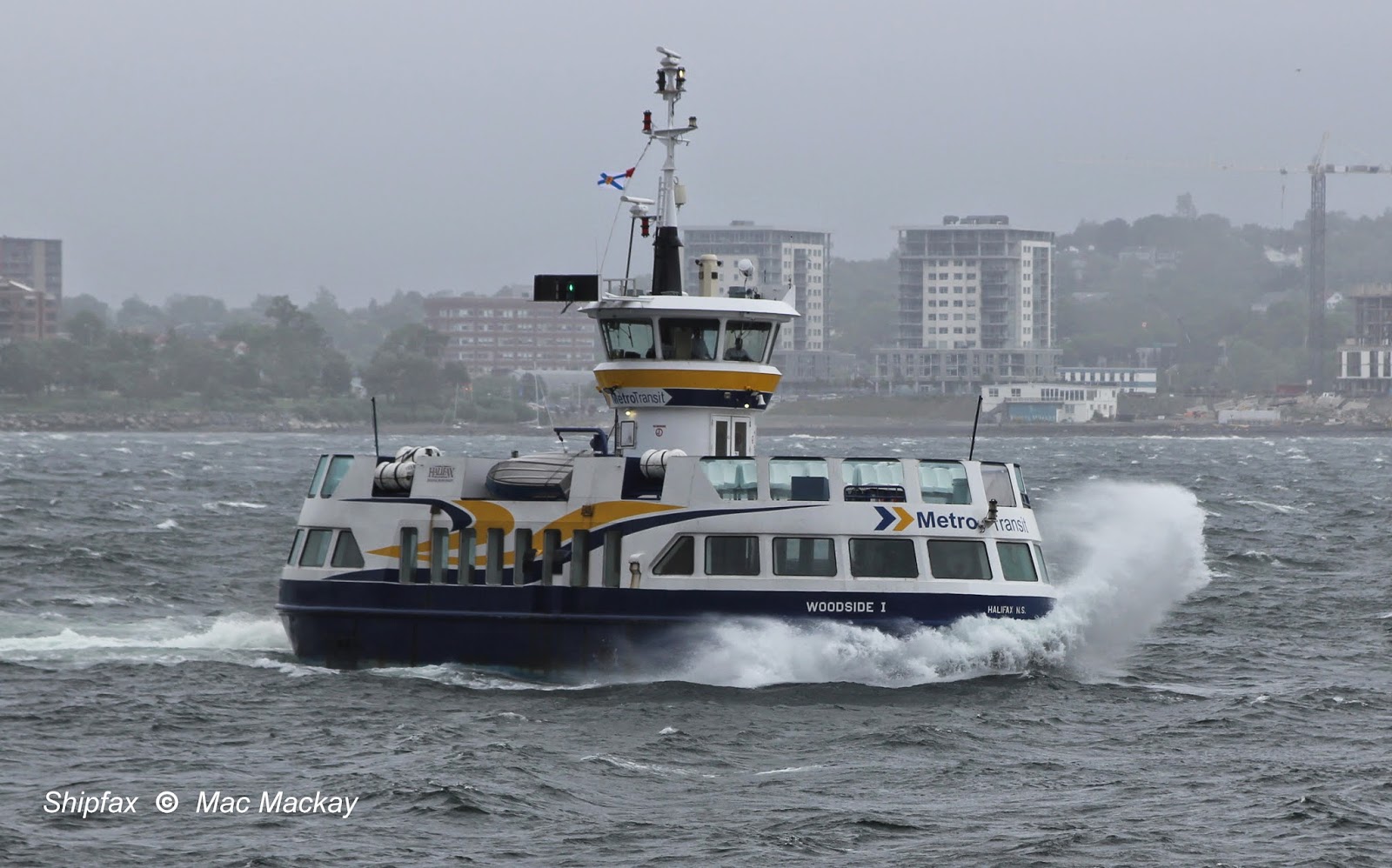 Shipfax is expecting power interruptions during the day, so updates may or may not be possible.

Update: A scow used for cruise ship garbage removal was tied up at the IEL dock in Dartmouth. With the wind blowing right up the harbour from the south, it was likely to break loose, so the tug Belle D moved it down to the an anchorage off the LeGrows dock near the MacKay bridge about mid-morning.
As of mid-afternoon the ferries were will still running, the sun was shining madly, there was still a high gusty wind and quite a swell running in the lower harbour. However nothing seemed to be amiss.

Update: Also in port, the Oceanex Sanderling remained at Autoport, and was probably able to work its RoRo cargo, if not during the early part of the day, certainly by the afternoon and evening when calm conditions began to return.

Conclusion: Arthur turned out to be a typical post tropical storm. Its path, generally up the Bay of Fundy, gave winds, but very little rain to the Halifax area. There were high seas for a time, but minimal tidal surge. Despite some power interruptions due to fallen trees, there was little damage in Halifax itself, and the port infrastructure seems to have escape unscathed. By late afternoon, the winds had begun to die down and seas flattened out, and it was pretty much all over by the evening. Ferries ran without interruption and the bridges remained open.
The strongest effects from the storm were felt on its western side, and so New Brunswick bore the brunt of wind and rain.