The elegant old lady of the Bay of Fundy, Princess of Acadia, has apparently been granted a stay of execution. As various parties hastened to Saint John last week to hear an announcement by the Minister of Transport, they were anticipating news of the ship's replacement. Instead they could conclude that she will probably still be in service two years from now (which gives the government time to call another election and re-promise for the umpteenth time that a replacement is just over the horizon.) 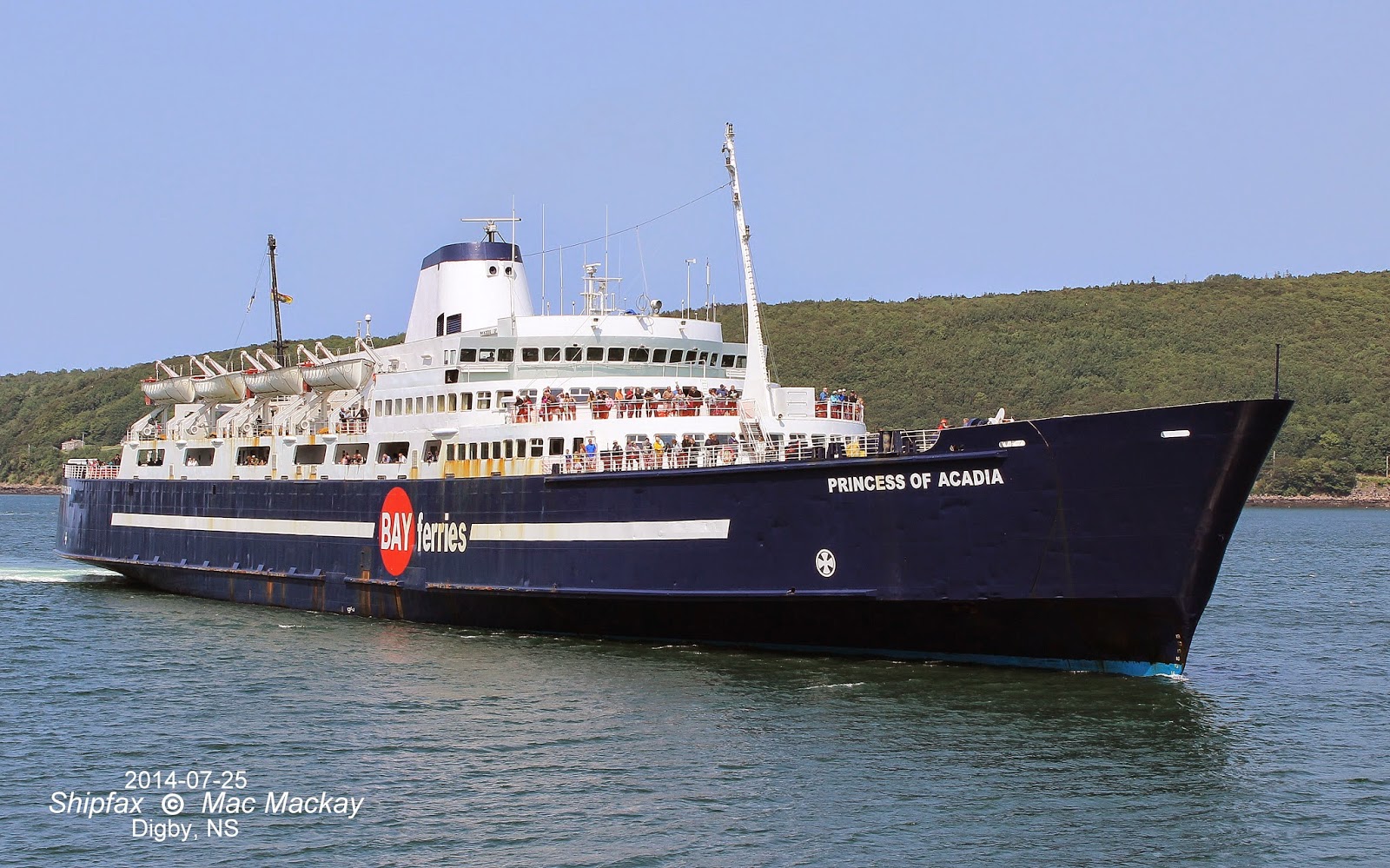 Princess of Acadia puts some reverse on her props as she glides into Digby this afternoon in a postcard perfect arrival.

Built in 1971 for CP Ships the 10,108.58 gross ton ferry, at 150m long and with a passenger capacity of 650 is certainly a big ship, but for her sometimes bumpy 92 mile run between Digby, NS and Saint John, NB, she has proven to be the right size, though nowadays never loaded to capacity. Her four GM locomotive type diesels are inefficient by current standards (and polluting too), and the ship is certainly tired despite numerous refits and redecorating.

In 1974 the Minister of Transport took over ownership of the ferry and in 1976 management was transferred from CP to CN Marine (later to become Marine Atlantic). Bay Ferries became managers in 1997.

The government previously announced  that they wanted to "identify" a replacement by January 3, 2014, select one by May 31, 2014 for delivery July 31, 2014 to undergo modifications by December 31, 2014 and to go into service in March 2015. Minister Rait merely announced $58 mn over two years of funding for three ferry services: Digby-Saint John, Caribou-Wood Island, and Souris-Grindstone, with no new ferry in sight or even hinted at.

The "new" ferry for Digby-Saint John was in fact to have been a used ferry, built not before 1995. How a 20 year old ship could even be contemplated for this service is beyond me. Not only that it was to be 85m long versus the 150m of Princess of Acadia. The 399 passengers (they threw 250 overboard in one stroke of the pen) will be sick as dogs on rough days due to pitching, even if the "new" ship is bristling with stabilizers. Maybe they found that their inadequate spec was not going to be met without huge refit costs and terminal upgrades and have gone back to the drawing board. I hope so. After all British Columbia Ferries and Société des Traversiers de Québec are building new ships overseas. They aren't going to fall into the trap that the feds went for of buying bargain basement trains and submarines abroad. Surely they have learned from those fiascos by now. Let's hope that instead of buying time (and trouble) at a low price they will decide to buy new for quality and the long term.

Perhaps the new ferry is is just over the horizon, but I suspect it is sailing away from us, and it will be several years before the great old Princess is finally tied up for the last time and the Bay Ferries logo is affixed to a new ship.