Pioneer on its way to the scrappers, Ambassador may follow

The sad parade of ships to the scrap yards continues, so this is only one in series of ship "obits" that will appear in the coming months.

Pioneer is the latest on the list. It was one of two Canadian-built ships that were often seen in Halifax over the years that have now been removed from service. Both were built in the early 1980s - the last heyday for Canadian shipbuilding - by the same owners, in their own shipyard, for essentially the same service.

Older of the two is Pioneer, built as Canadian Pioneer in 1981 by Port Weller Drydock Ltd. The Upper Lakes Group owned both its own shipping line and the shipyard, and was always an innovative outfit, even though some of its ideas didn't work terribly well.

At 730' long x 75'-10 1/4" wide, Canadian Pioneer was of the then maximum permissible size for the St.Lawrence Seaway. Where it differed from other Great Lakes type self-unloaders was that it had a deeper hull and could load to ocean drafts, and could sail deep sea. At 24,113 gross tons, 37,448 deadweight tonnes at seagoing draft, its capacity was only 23,625 (pre-metric) tons at Seaway draft.  The intention was that the ship would sail seasonally on the lakes if needed, but mostly on coastal and ocean routes. Deep sea self-unloader capability was in its infancy then, and demand was fairly good as CSL discovered, and was also building "Salty Lakers".

The ship was fitted with a single contollable pitch prop, driven by a 9,000 bhp Doxford 76JC4R engine - the last engine built at Doxford's factory in Sunderland, England. Known for their durability and longevity, slow speed Doxfords have also been credited with ensuring the longevity of the ships they powered.

For the first few years the ship followed its intended pattern but by 1988 the demand for iron ore on the lakes had dipped, but there was work for it outside - however, not with Canadian pay scales and regulations.  On December 18, 1988 it arrived in Sorel, QC, and was re-registered in Port Vila, in the Republic of Vanuatu. That little known flag of convenience had recently come in to existence when the joint French/English territory of the New Hebrides became independent in 1980. 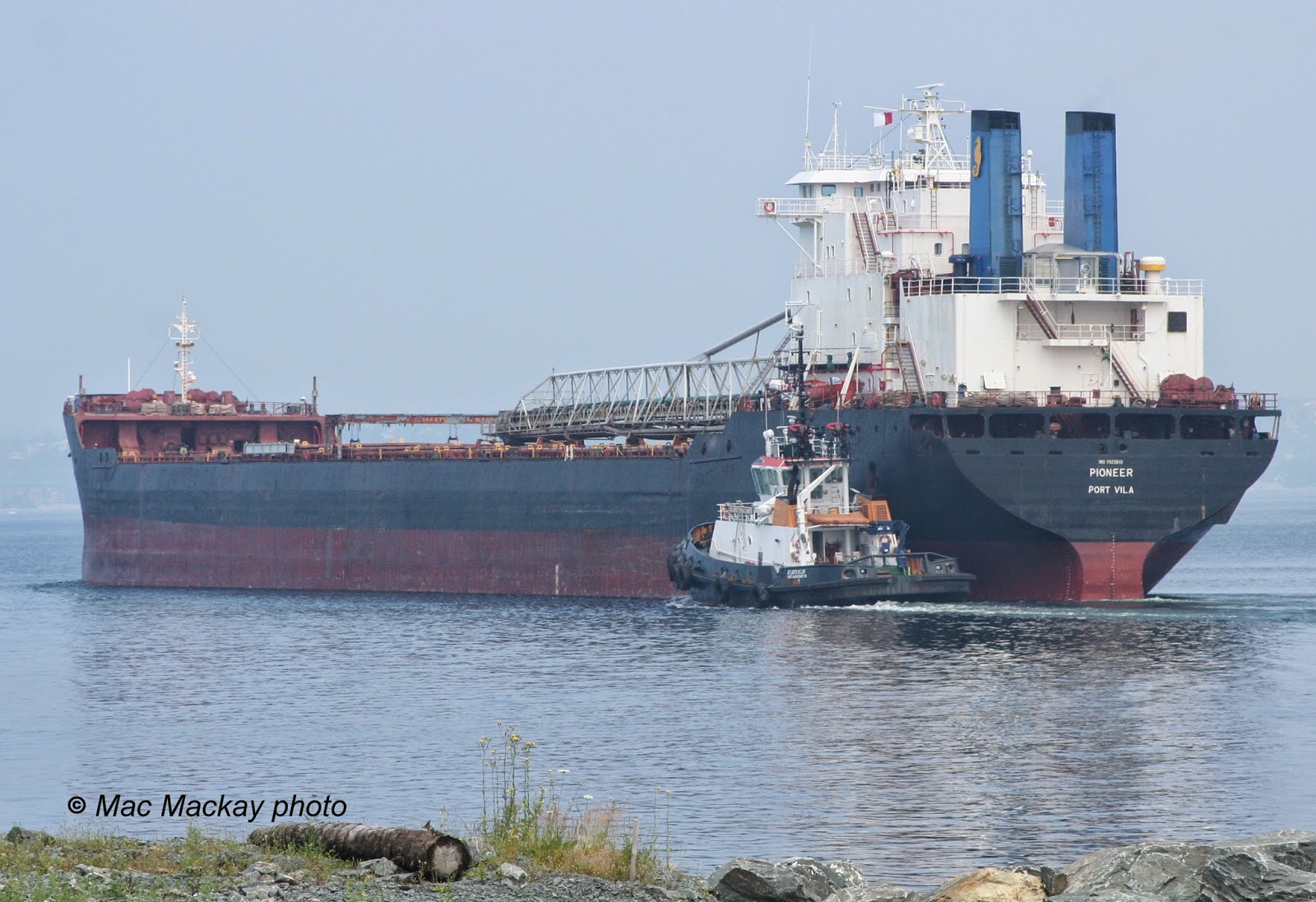 Renamed Pioneer by parent company Marbulk Shipping Inc (then a subsidiary of Upper Lakes Group) the ship went deep sea and only once revisited the Great Lakes. In 2002 it delivered a load of coke from Baltimore to Port Colborne. As part of Marbulk, Pioneer received the blue funnel with gold seahorse, originally the colours of Island Shipping, an Upper Lakes offshore company.

Canada Steamship Lines had formed a pool of seagoing self-unloaders with their own subsidiary CSL International Inc as operators. Pioneer joined the pool and was often seen in Nova Scotia, particularly in the Strait of Canso with coal or loading aggregate or gypsum. Halifax was also a regular port of call to load gypsum.It did go further afield, running coal from Norway to Germany for a time and also carrying aggregates on the west coast.

In 2000 CSL purchased Upper Lakes' 50% of Marbulk (Algoma had the other 50%) and the three Marbulk ships Ambassador (ex Canadian Ambassador) and Nelvana continued to work in the CSL pool.

In 2014 Pioneer made six visits to Halifax, mostly short runs from National Gypsum to Baltimore, MD or Burlington, NJ. On March 11 it experienced a propeller problem and was in port until March 23 until it was repaired. The ship was ballasted down by the bow and made an inglorious procession with tugs, from National Gypsum to pier 25-26.

The writing was on the wall for the ship as mechanical problems became more common, and it passed the thirty year mark. With a number of new ships coming into the CSL pool, it was now obsolete too.

On June 19 it unloaded its last cargo in Cameron, LA and headed out to sea bound for Aliaga, Turkey and the scrap yard.It is due there July 18.

Fleetmate Ambassador (ex Canadian Ambassador) built in 1983 by Port Weller DD, had a parallel career, but went foreign in December 1986, when it hoisted the Vanuatu flag in Sorel, QC and took on the golden seahorse funnel marking.

On December 31, 1994 when unloading rock phosphate in Belledune, NB, a bearing failure in the conveyor system, ignited a rubber belt, causing a extensive damage. An estimated 25% of the accommodation was gutted and there was structural distortion. The ship was repaired and returned to service several month later.

It also worked overseas, running coal transatlantic from Norfolk for a time, and in Indonesia. It mostly worked in eastern North America however, from Newfoundland or the Strait of Canso as far as the Caribbean. The ship visited Halifax consistently for gypsum, and had several repair and refit sessions at Halifax Shipyards.

It was also notable for having delivered three cargoes of coal to Halifax -one each in 2000, 2002 and 2003. It unloaded onto the ground at pier 9D, for Canada Cement / Lafarge's Brookfield, NS plant.

On April 13, 2000 while in Halifax Shipyard, the ship was renamed Algosea and brought back under the Canadian flag, with Halifax as the port of registry. After meeting Algoma's short term need for another domestic ship, it reverted to Ambassador and the Vanuatu registry on December 31, 2000 at Trois-Rivières, QC. 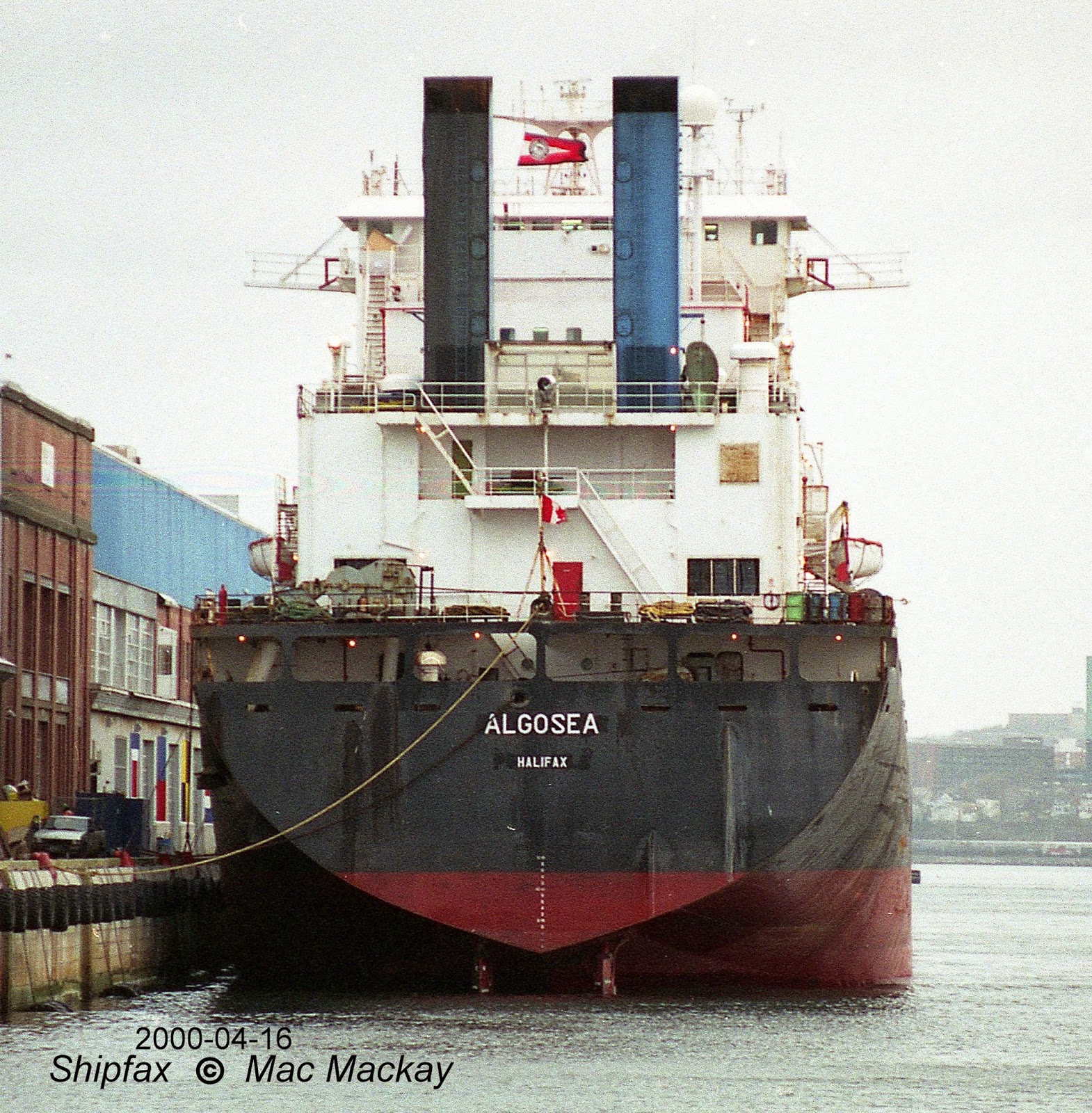 In 2003 it was refitted with sliders in place of its roller swing gates at Gdansk Shipyard in Poland. On July 12, 2006 it damaged ballast tanks when it made heavy contact with an approach wall at the Canso Canal. It then seemed to enter a period of frequent repairs until late 2012 when it was sold.

Renamed Pramudita under the Indonesian flag, it was acquired by Jakarta owners to carry power plant coal. However, on September 12, 2013 in repetition of 1994, a fire broke out in the self-unloading area while discharging coal at Banten. Despite the efforts of fire tugs, the engine room and accommodation were gutted, and areas of the hull in way of the engine room and cargo holds were badly distorted. The ship was laid up, and it is unlikely that it will ever be repaired.

Both ships were built with finer bow lines than a normal laker, however they were fitted with twin rudders and a bow thruster for improved maneuvering. They had no bridge wings, to ensure Seaway lock clearance, and continued until the end with their flimsy "fold-up" bridge wings, so they were something of a hybrid. As noted they rarely re-visited the Lakes, but they remained capable of doing so until the end.
All in all, judging by thirty or so years of service, they must have been a success.