Cargo Transfer in the Basin - Updated


Two tankers met in the Bedford Basin this morning for a transfer operation. Bunkering happens frequently in the Basin, but this is different.

First to arrive was the handymax tanker Asphalt Eagle owned by Chronos Shipping of Athens, and flying the Greek flag. A typical product of the Onomichi Dockyard in Japan, measuring 27, 284 grt, 46,178 dwt. Since it was built in 2004 it carried the names Iver Eagle to 2005 and Seto Eagle to 2009. It is understood to be under charter to Sargent Marine, of Boca Raton, FL, the world's largest asphalt tanker operation. ]The company is presently embroiled in an internecine feud between father and two sons against a third son, but that may not be relevant to this particular ship arrival.]
[For all you need to know see: http://en.wikipedia.org/wiki/Harry_Sargeant_III  and: http://online.wsj.com/news/articles/SB10001424052702304744304579248483324834704 ]

No sooner had it secured at anchor, in came the much smaller 6,292 grt, 9,240 dwt tanker Asphalt Sailor. The Marshall Islands flag tanker was built in 2006 by Kraljevica Shipyard in Croatia, and is owned directly by Sargent Marine.  It came alongside and tied up to the anchored Asphalt Eagle and transfer operations began soon after.

No oil booms were deployed, which indicates to me that the smaller tanker may be bunkering the larger one. If it were a cargo transfer operation I assume that there would be more stringent precautions taken against a spill. However, the larger tanker's hose boom is in use, so it may in fact be a cargo transfer


I do not recall a foreign tanker ever bunkering another ship in Halifax. From the 1980s or so, only Imperial Oil provided bunkering service in Halifax. Before that Irving Oil and Foundation Maritime also did bunkering. When Imperial stopped refining in Halifax last year, Sterling Fuels took over port bunkering service, chartering the Algoma Dartmouth, which had previously been used by Imperial. Sterling has been acquiring diesel fuel from Imperial, but they send the Algoma Dartmouth to New York for heavier fuels. To date it has made three such trips.

As for cargo transfers, they are equally rare. There have been instances where ships with damage came in to Halifax and transferred their fuel to other ships, but there has not been one of those in many moons either.

Update: A closer look from a different angle reveals a transfer hose slung from Eagle's boom. 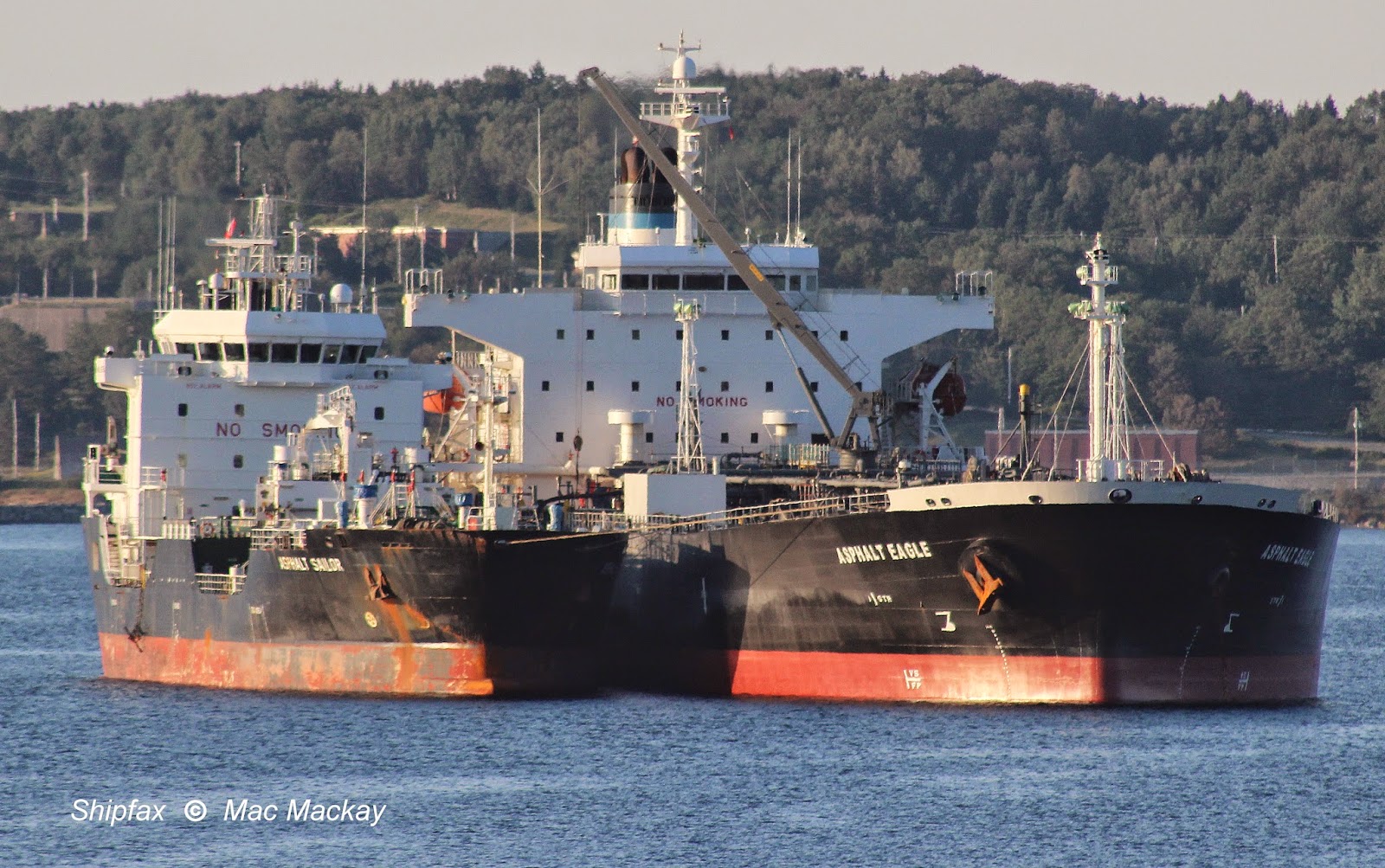 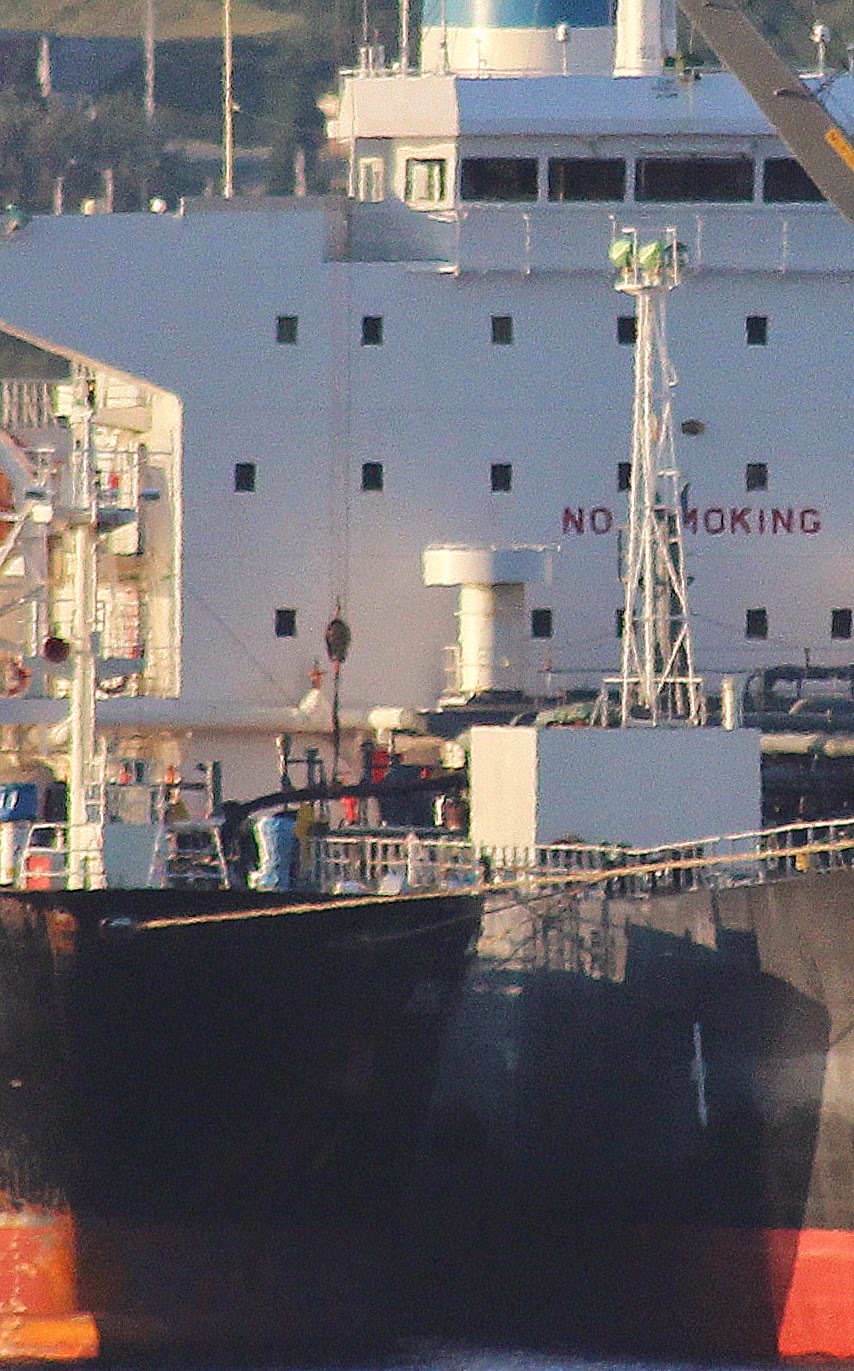 Update 2, 2014-07-13
Both tankers ailed this morning and it was obvious by the draft marks on Asphalt Sailor that it has indeed transferred cargo from the Asphalt Eagle, so it was not a bunkering operation.

Asphalt Sailor was the first to go, and it was well down on its marks, indicating that it had loaded cargo from Aspahlt Eagle. Note the elaborate heating plant amidships to keep its cargo in liquid state to allow for pumping. Its destination is Providence, RI. 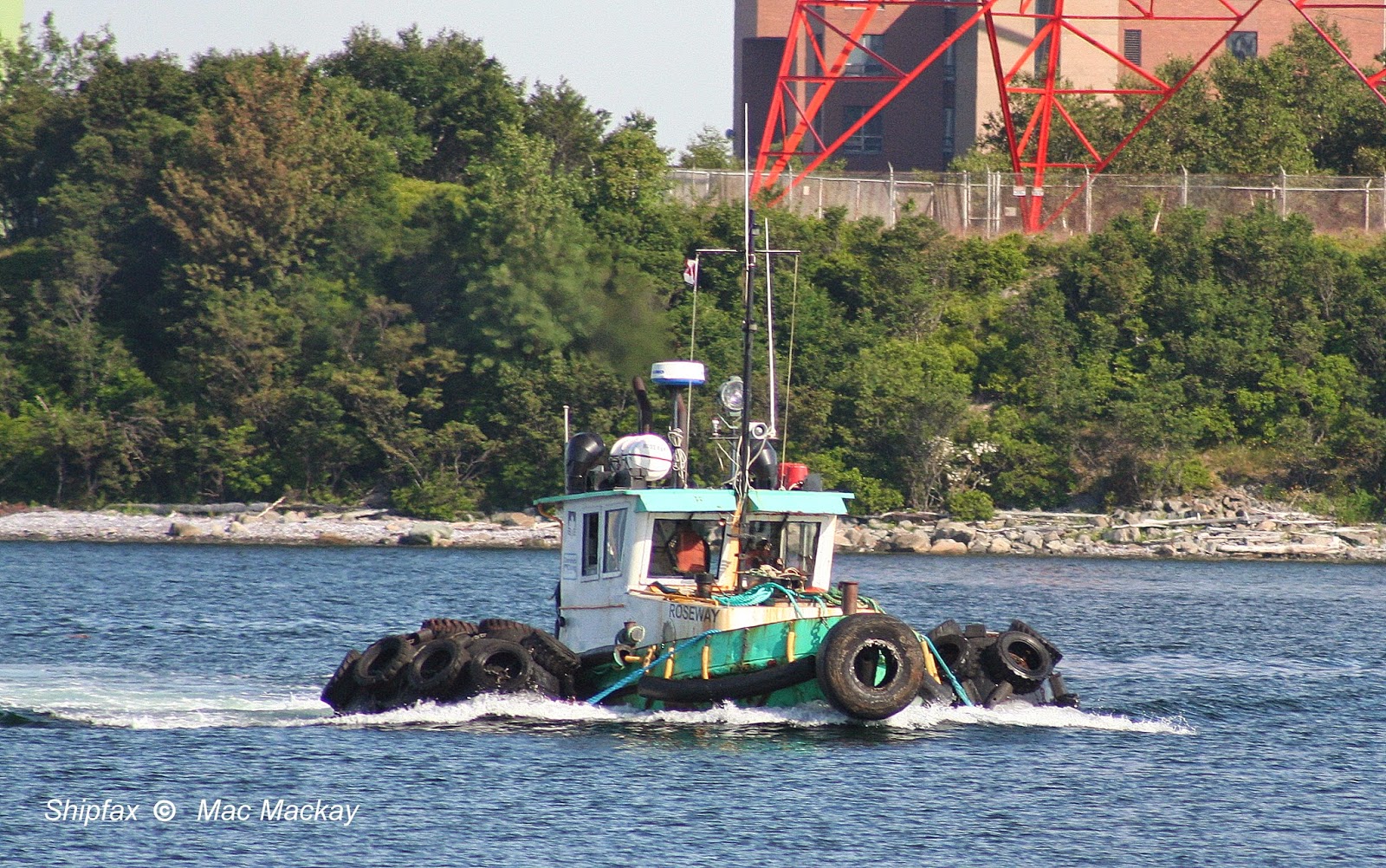 Next along was the tug Roseway with two fenders, one on each side, which had been used to keep the two ships apart during the transfer. There was no oil boom used.

Asphalt Eagle took some time to weigh anchor, but once underway made its way through the Narrows, giving Portland, Maine as its destination.

As stated previously petroleum cargo transfers in Halifax are not unheard of, but are rare except in case of emergencies where casualties have to be lightered off, or for ships to reduce draft. There have been transfers to ice class tankers for transit up the St.Lawrence. It is rare however to have a transfer for what appear to be solely convenience or commercial purposes.