Among the ships sailing from Halifax today were some biggies and one smaller one.

Biggest was Beate Oldendorff, a 112,895 grt, 227,183 dwt bulk carrier. This bruiser was built way back in 1988 by Mitsui Ichihara Engineering and Shipbuilding of Ichihara, Japan, as Kasuza Maru. It was renamed Kasuza in 1995, and received its present name in 2010 when acquired by Oldendorff Carriers of Lubeck, Germany. It arrived in Halifax June 27 and tied up at pier 31 for repairs. It gave Sept-Iles, QC as its destination when leaving today.

It was built in 2005 by Imabari Shipbuilding, Saijo Dockyard in Imabari, Japan as Cape Pelican, a name it held until 2007. Now registered in the Marshall Islands, it is operated by Dian Shipping of Athens.

After Asian Gyspy Moth inspection by the Canadian Food Inspection Agency, the ship sailed for Pointe-Noire, QC, on the other side of Sept-Iles Bay.

A fairly beat up looking Atlantic Conveyor also sailed this evening, on its regular transatlantic run.

No shrimp, at 58,438 grt, it will soon be celebrating a milestone. It was on July 12, 1984 that the ship was launched by Swan Hunter, on the Tyne, and it has been making the brutal transatlantic run monthly ever since.(It was lengthened in 1987.)
It made its first arrival in Halifax February 1, 1985, another 30th anniversary it is likely to celebrate. Replacement ships for the 5 ACL sisters are on the way, but forty thirty-one years may be possible - an unusual achievement for a ship these days.

A more modest ship bunkered this afternoon and sailed this evening: 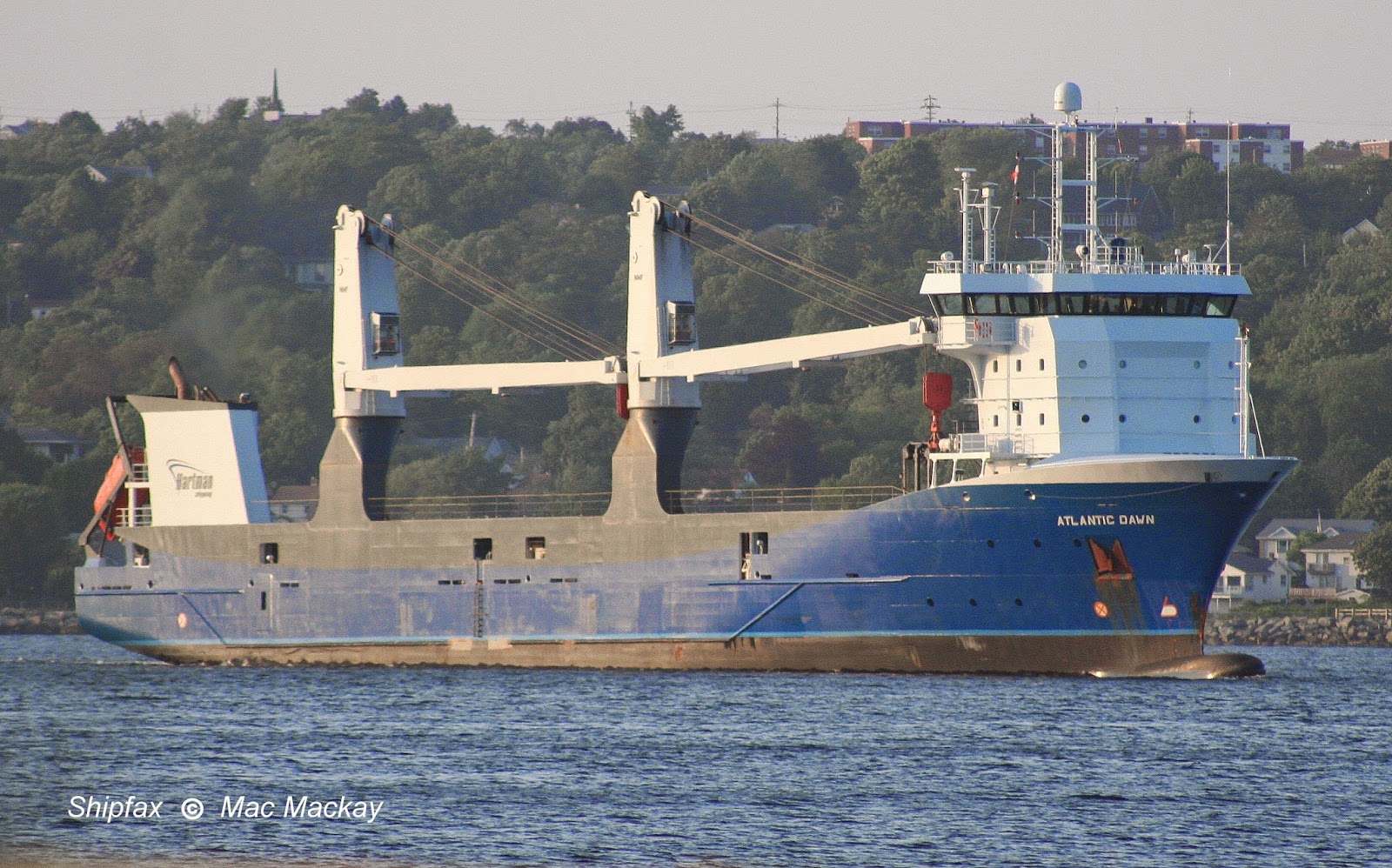 Atlantic Dawn is registered in the Netherlands, where it is owned and was built. Owners, Hartman Shipping of Urk, specialize in project cargoes, and the ship has a long uninterupted deck space for awkward shaped loads. It was built in 2013 by Shipkits of Groningen and measures 5460 grt, 4200 dwt. It arrived from the St.Lawrence River and sailed for Charleston.