Due to over supply of ships and lack of volume all shipping lines are hurting these days, so this move is expected to help all parties by increasing the amount of cargo carried without adding ships, but maybe using bigger and more efficient ones.

In the background there is a move underway by the Chinese government to merge the two state owned shipping lines COSCO and CSCL. Minority (non-government) shareholders will try to block the merger, but it is likely inevitable. It would be the world's fourth largest container line, and would be a major shakeup, particularly in the Asia-US trade lane. (Last year China blocked the proposed P3 Alliance between Maersk, MSC and CMA CGM, which would have shared ships, but with all three lines remaining independent.) 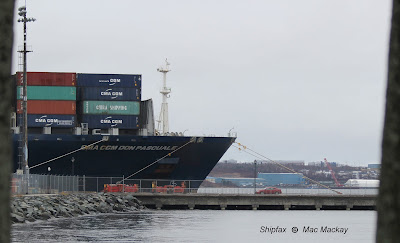 CMA CGM Don Pascuale in Halifax on Saturday with a CSCL and UASC containers.

Meanwhile CMA CGM is in exclusive talks to take over NOL (a.k.a. Neptune Orient Line) the Singapore owners of APL (known previously as American President Line). This potential $1.9 bn deal is the biggest merger in shipping in some time. It could boost CMA CGM from third largest to second largest shipping line, edging ahead of MSC (Mediterranean Shipping Co).
APL is currently a member of the G6 Alliance with Hapag-Lloyd, which already calls here.What effect a CMA CGM takeover would mean is unknown, but on non-competing services it might be beneficial by adding CSCL traffic to the G6).

All this is happening with Maersk, the largest container line, retrenching by laying off employees, cancelling ship orders and delaying delivery of others.