Two consortium companies were instrumental in the start of container services to Halifax*. Both companies were founded by established shipping lines that banded together to carry the immense cost of building new ships. Atlantic Container Line (ACL) is perhaps the better known because it is still in operation more than fifty years later, although with completely different owners. There will be more on that line in this blog in the months to come, although most of its story has been told here before.

As you will read, the first Atlantic Star delivered the first RoRo cargo to Halifax March 3, 1970. I somehow neglected to mark that anniversary here. 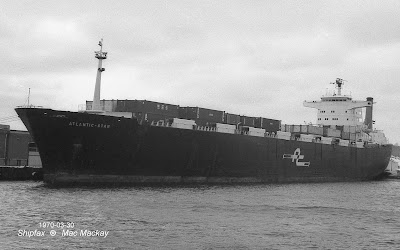 It was ACL's Atlantic Cinderella that unloaded the first cargo at Halterm (now PSA Halifax) in November 1970. I am sure the port will be celebrating that event.

Also in at the beginning was a Canadian company, Clarke Transportation. Its history is far and away too long to recount here,  but you can read the entire story at: https://clarkesteamship.wordpress.com/about/

In the 1960s Clarke, a family owned company based in Montreal, had numerous transport related interests including ship agency for Bristol City Line of Steamships. Along with Compagnie Maritime Belge, the three formed Dart Container Line to operate a weekly service from Antwerp and Southampton to Halifax, New York and later Norfolk. They ordered new pure container ships (with no RoRo capability) that turned out to be the largest container ships in the world at the time. With a container capacity of 1500, they were built to withstand the rigors of the North Atlantic year round, and carried most of the containers below deck.

The first of those ships to arrive in Halifax was Jorg Kruger on July 17, 1969. 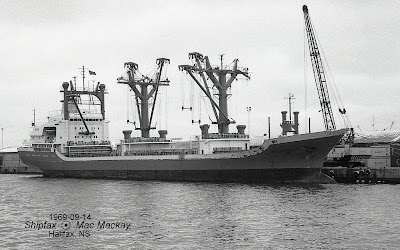 Halterm (of which Clarke was a part owner) was not completed yet and the ship tied up at pier 31. It unloaded 161 containers and loaded 92 - all 20 footers - using ship's own gear. Shore cranes moved the containers on the pier as there were no forklifts or RTGs yet. 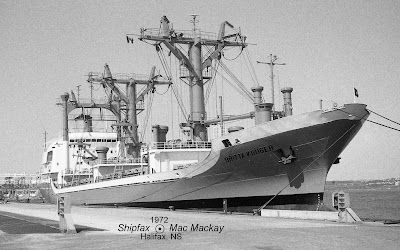 The ships were twins, newly built in 1969 by Elsflethwerft in West Germany. Measuring 5383 gt, 7047 dwt, the had a capacity of about 200 TEU, but they were fitted out as general cargo ships.
They carrried two 45 ton and three 22.5 ton derricks.

They were painted in Dart's choice of orange hull colour, the same colour that Bristol City Line and CMB used for their ships.

The third ship was similar. Juno came from the Nobiskrug yard in Rendsburg, measuring 5025 gt, 7500 dwt. 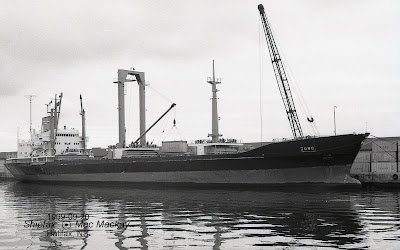 Juno carried one 60 ton derrick amidships, and two 10 ton derricks on masts at the wheelhouse. Although designed to carry 10 ten ton derricks the remaining derricks were not fitted, and shore side cranes were needed to work cargo in number one hold.

When the new Dart ships entered service, the three charters were returned to their German owners and all lasted into the 1990s with multiple changes of name.  Clarke Transportation sold its interest in Dart, which was eventually taken over by C.Y.Tung and folded into OOCL.

Clarke still exists, and is owned in Halifax. Its sole shipping interest is now the ferry Trans St-Laurent that operates seasonally between Rivière-du-Loup and St-Siméon, QC. This year's start date is still scheduled for April 9.


*ZIM was aslo an early line, but remains independent.