The cargo ship Acadia Desgagnés arrived on May 21 and tied up at pier 25. As usual The ship has been working under the Barbados flag for the winter and is returning to Canadian flag for the summer. However it is much later this year. In the past the reflagging has been effective April 1 or May 1. It usually reverts to Barbados, effective January 1. 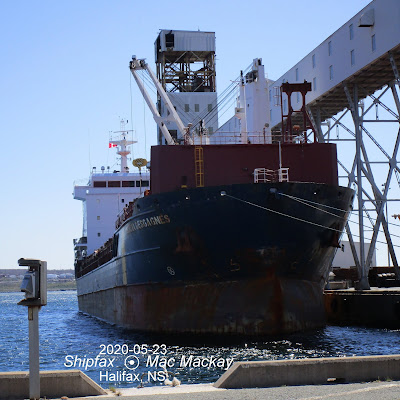 Some hatches open and cranes askew, Acadia Desgagnés gets a spring cleaning at pier 25.

The ship is a multi-purpose general cargo/bulk carrier and is reinforced for heavy cargoes, and unloading by grabs. It was built in 2013 by Shandong Baibuting, Rongcheng and comes in at 7875 gt, 11,353 dwt with two 40 tonne capacity cranes. It was originally to be named Montelena but was renamed BBT Ocean and then Sider Tis in 2013. Desgagnés acquired and renamed the ship in 2017. It was registered in St.John's, NL unlike most other ships of the fleet, that are registered in Quebec ports.
The ship is used in bulk trades around the Gulf of St.Lawrence, such as salt from Pugwash, NS, and does not have the heavy cranes needed for northern supply work.