Although I live on the Halifax* (southwest) side of Halifax harbour, the best views of ships are sometimes from the opposite, Dartmouth** side of the harbour. Fortunately there are bridges and ferries that make it easy to get back and forth. So depending on the position of the sun and the scene of the "action" I go to Dartmouth frequently.

Today there was an unusual ship move that would be difficult to see from Halifax, so off to Dartmouth I went. 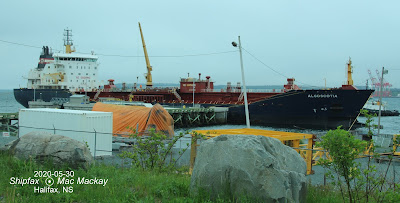 The Algoma tanker Algoscotia was set to move from the Irving Oil dock to Imperial Oil. Built in 2004 by Qiuxin, Shanghai the 13,352 gt, 18,610 dwt ship has been calling in Halifax since new. Algoma took over Imperial Oil's own tanker fleet and gradually went about replacing the ships with new ones. Algoma tankers usually carry Imperial product, so seeing the ship at the Irving Oil terminal is rare although not unheard of.

In Dartmouth, and at the next dock, the heavy lift shift Bigroll Beaufort is still at IEL Woodside waiting to offload the next wind turbine. The first of the four has been dispatched to the Virginia coast for installation. I had the chance for a new angle on the ship. 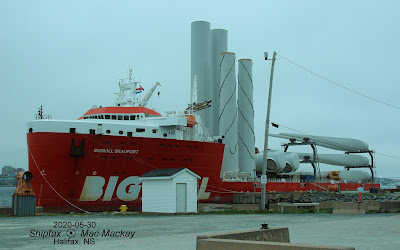 Is there something about Nova Scotia where utility poles are never vertical?

* The name "Halifax" is now applied to the Halifax Regional Municipality [HRM], a huge geographical  area formed of dozens of smaller communities in the year 1996. Among them were the cities of Halifax, Dartmouth and Bedford and the largely rural Halifax County. Its population of just over 400,000 plus resides in an area of 2,120 square miles, strung along a ragged coastline.

**The City of Dartmouth was formed in 1961 with the amalgamation of several unincorporated neighbourhoods, each with a distinct identity. Woodside, South Woodside and Imperoyal (named for the Imperial Oil refinery) were among them, along with the town of Dartmouth. "Dartmouth" is still an official geographical name, even though it is part of the Halifax Regional Municipality. In 1996 when the HRM was formed the City of Dartmouth had a population of about 65,000. The name "Halifax" has now come to include Dartmouth when referring to the Halifax Regional Municipality. However Dartmouth residents usually make the distinction, and others extend the term Dartmouth to a huge swath of the eastern portion of the HRM that was never part of the old City of Dartmouth.