THE Alliance seems to be happy with MOL's M class ships both in their original form and as renamed and repainted as ONE's M class. Today there were two in port at the same time. They passed each other in the lower harbour as MOL Modern sailed and MOL Mission arrived. 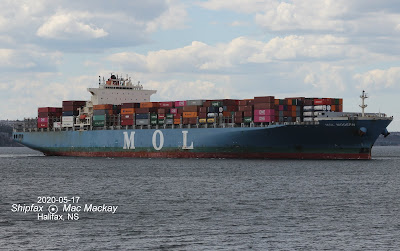 Despite chasing the ship from one end of the harbour to the other, it wasn't able to get a photo of the ship in full sun.

It was built in 2011 by Mitsubishi Heavy Industries, Nagasaki and is listed at 79,283 dwt.

MOL Mission, which was here May 4 westbound, was also built in 2011 but at MHI's Kobe yard. With the same GT and container capacity as the rest of the class, it comes in at 79,491 dwt.

It was much more clement weather for this visit than the ship's last, and once it was in the harbour it was in full sun most of the time.
http://shipfax.blogspot.com/2020/05/mission-accomplished.html

With sailing season apparently underway, despite the pandemic, MOL Modern had to sent out warning signals several times as it transited the Narrows.