Despite a bracingly cool wind, and some driving droplets of what could only be described as a cross between fog and drizzle, I braved the elements to catch MOL Mission arriving this afternoon as it transited the Narrows en route to Fairview Cove. 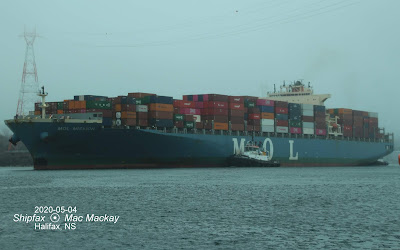 Mitsui OSK Lines has been subsumed into the new Japanese container line Ocean Network Express along with NYK and K-Line. As the MOL M class ships enter their required drydockings they are being repainted in ONE's magenta hull colour and renamed with ONE replacing MOL in the name.