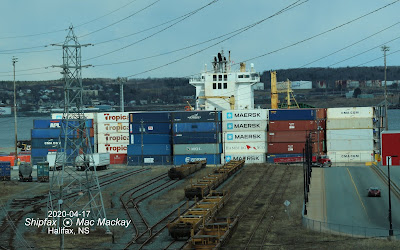 The ship arrived April 17 and tied up at pier 34 where it was effectively boxed in by stored containers, blocking a clear view.

The ship was built in 2007 by Zhejiang Ouhua Shipbuilding Co in Zhoushan as MED Atlantic, becoming Vecht Trader in 2008 and AS Federica in 2015. The 15,375gt, 18,350 dwt ship has a capacity of 1296 TEU, and carries two 45 tonne SWL cranes. It flies the Madeira flag, the offshore registry of Portugal. 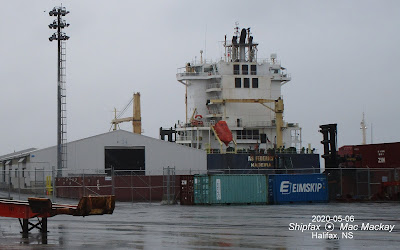 The ship last saw service with one of ZIM's feeder loops, the LAG -Lesser Antilles, Guyana run out of Kingston, Jamaica and Port Everglades, FL.

No destination was listed when I posted this report, but I will update when the ship changes its AIS signal.

Update:  It appears that the ship went out to sea (beyond the 12 mile limit) and returned to the outer anchorages/
Posted by Mac at 10:02 AM