This post has been edited and updated since it was originally filed.

The development of fast ferry / commuter craft in Halifax Harbour has been proceeding at glacial speed since 2005 or earlier.
http://shipfax.blogspot.com/2018/01/an-idea-whose-time-has-come-again.html

However in today's news it appears that it may become a reality sooner rather than later. The Halifax Regional Municipality has apparently found a way to tap into some federal funds, despite local budget cuts, to add new bus and ferry routes.  The reports indicate "three new ferry routes", but I believe that is an error. It is more likely that there will be one route from the Bedford Basin to the downtown terminal, with three stops - namely Bedford, Mill Cove and Shannon Park.

The press reports says that the service will be operated by catamarans, and that the boats and terminals are yet to be built. I give that a three to five year window, so it will certainly not alleviate downtown traffic woes in the short term. However combined with the  container shuttle train project from the Southend Terminal (PSA Halifax, formerly Halterm) and the Moncton road/rail interchange, there is some relief on the horizon.

There was once a pier at Shannon Park, and a ferry service to HMC Dockyard, run by the Navy using "duty boats" - wooden hulled craft, that carried a few dozen passengers. 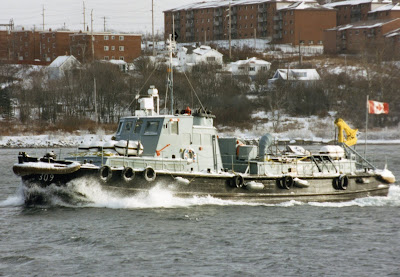 For those not familiar with the harbour, Shannon Park is adjacent to and south of the MacKay bridge on the Dartmouth side of the Narrows, opposite Richmond Terminals (Pier 9). It was once the site of a large military housing complex, complete with school, rink, store, chapel, etc., The site has been cleared for future development.