Today a new to me ship arrived and sailed for the Icelandic shipping line Eimskip. Named Selfoss it has been in the Eimskip fleet since 2017, but has been serving other routes. Now it is appearing on the Green Line with Skogafoss and  EF Ava, replacing Pictor J which has been transferred to the Yellow Line.
See all of Eimskip's services here:  https://www.eimskip.com/services/liner-services/sailing-schedule/ 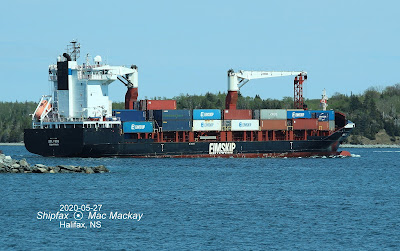 Selfoss (Foss means waterfall in Iceland) is named for a prominent attraction and a town in south of Iceland. It was built in 2008 by Fujian Mawei Shipbuilding Co in Fuzhou, China, as the Sophia for the German Capt. Manfred Draxl Group. It was acquired by Eimskip and renamed in 2017. The ship measures 7464 gt, 8166 dwt and has a capacity of 698 TEU. Two cranes have been fitted since the ship was built - possibly in 2017.  Oddly the ship is registered in the Faroe Islands, still part of Denmark, but now an autonomous territory, and not governed by Danish customs and business regulations.