I generally resist the temptation to post multiple images of ships arriving or departing.  Today was an exception because there was an unusual event in the harbour. It was a case of "double pilotage".

Canadian navy ships are not required to use civilian pilots in Halifax harbour. They use navy pilots from the Queen's Harbour Master to berth and unberth ships and direct naval tugs. Navigating in and out of the harbour is done by the ship's own officers and crew.

This is in part a carry over from the days when the HMC Dockyard tugs were commissioned naval vessels and civilians did not give orders to naval personnel. Nowadays, with civilian crews on naval tugs, it is more a question of familiarity and usage. Dockyard pilots know how to use the Dockyard's VS tugs. They have developed a common terminology for directing the tugs, which may be different from the language used to direct the civilian ASD tugs.

Foreign navy ships visiting Halifax use civilian pilots to transit in and out of the harbour and to berth and unberth, and use civilian tugs.

The RCN has an unusual situation now that it has a leased ship in its fleet. The supply ship Asterix, from Federal Fleet Services, has a civilian crew with embarked naval personnel and specialists. My observation before today has been that the ship has used a civilian pilot and civilian tugs on arrival, departure and movements within the harbour. Today however the ship used naval tugs. Although the ship had a civilian pilot aboard, there was also a navy pilot. After directing the operation of the navy tugs, that pilot disembarked to a Rigid Hull Inflatable Boat [RHIB] after the ship was clear of the pier and underway. The civilian pilot then took the ship to sea. 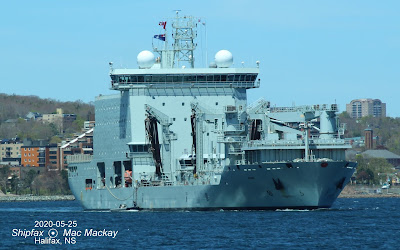 Pilot boat Scotia Pilot (yellow) sets out to disembark the civilian pilot at the pilot station (45 minutes away.)
The blue boat is Maintainer I, the Port Authority's work boat. 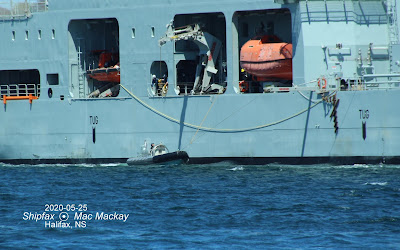 Preparing to re-embark the RHIB 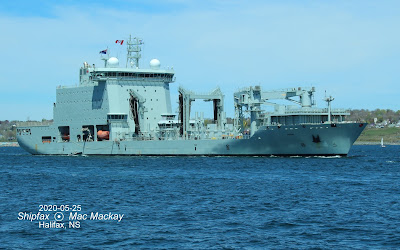 If you think you have seen this picture of the Asterix before..... 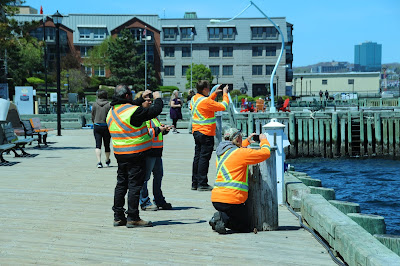 .....it may be because you saw one taken by one of these COVID-19 ignorers.