As most days prove in Nova Scotia the wind blows steadily on the coast. As a power generation source the wind is employed in the shallow waters of many European countries, but is relatively unknown in eastern North America where land space is not at a premium. That is about to change, at least in coastal Virginia, where Dominion Energy is about to install two 6MW turbines 27 miles off Virginia Beach as an initial test program. Eventually they hope to have up to seventy turbines in the same area.

Because the United States has no offshore installation vessels, a way had to be found to install the two units and still be in compliance with the United States's restrictive cabotage laws, commonly known as the Jones Act. 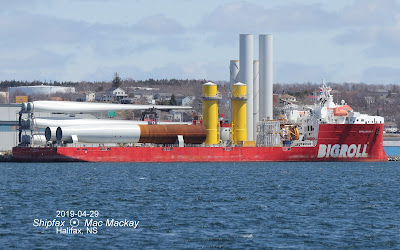 The wind turbines, including the towers and blades were built in Europe and arrived in Halifax April 28 on the specialist heavy cargo ship Rolldock Beaufort, seen here alongside the IEL dock in Woodside (Dartmouth).

The United States' cabotage law prescribes that only US built, owned, crewed and flagged ships may work between US ports. It would therefore require a Jones Act compliant ship to move the components from shore to installation site.

A loophole in the Jones Act means that ships arriving directly from overseas, without landing in the US can apparently work in US waters. [This has been contentious in the Gulf of Mexico oil patch, where US seafarers are been deprived of work in US waters.] Therefore Bigroll Beaufort will transfer its components here, and a specialists installation ship will pick them up in stages and install them directly without landing in a US port. 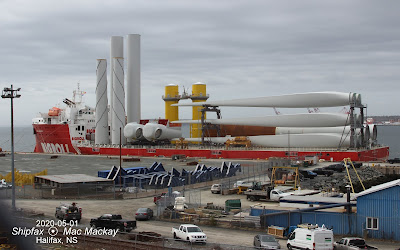 That installation ship is Jan de Nul Group's Vole au Vent which arrived in Portland, UK today, presumably en route to Halifax. Equipped with a 1500 tonne capacity crane, the ship is a jack-up vessel that can work in 50 meters of water. (More on the ship when it arrives here.) The de Nul company, well known Belgian dredging contractors, have also developed a specialty in offshore turbine foundations and installation.

Vole au Vent could not carry the entire project cargo in one trip, and there is not enough time to return to Europe to do the work in phases and still complete the project this year, so Halifax has become the staging point.