IT Intrepid - a classic

With the arrival on May 17 of IT Integrity, International Telecom's new ship, the veteran IT Intrepid may not be around that much longer, so I am taking every opportunity to get photos of the older ship. 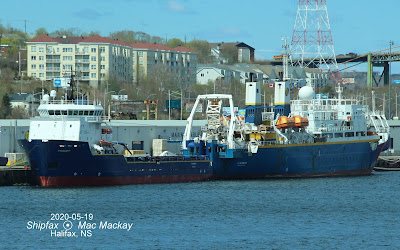 IT Integrity at left and IT Intrepid at right both arrived in Halifax on May 17.

IT Intrepid returned to Halifax after a few days of work in Newfoundland and sailed this afternoon for an even shorter trip. 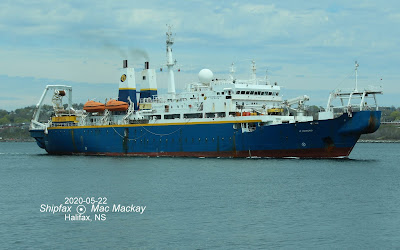 Outbound this afternoon IT Intrepid displays what are now considered to be classic lines for a cable ship. The bow sheaves are very rarely seen anymore.

The ship is heading out to International waters (still 12 miles for Canada Customs purposes) to fulfill some sort of legal obligation, and will be returning to Halifax later this evening.

IT Intrepid has worked out of Halifax for many years and has been featured in this blog many times:
http://shipfax.blogspot.com/search?q=it+intrepid

The ship is  certainly getting on in years, but had a major survey renewal in March of last year, so is good until 2024. We suspect that IT Integrity , which appears to be more of a cable repair ship than a cable laying ship, will supplement IT Intrepid at least for a time, but retirement is inevitable.

In the last few years IT International Telecom has hired local tug/suppliers from Maersk and Atlantic Towing for some cable repair work, so it looks like IT Integrity may be able to keep that work in house.
.
Posted by Mac at 2:50 PM

Labels: IT Integrity, IT Intrepid