Among the arrivals in Halifax harbour today (May 19) there were two of note.

Federal Mosel arrived and anchored for an as yet undeclared reason. A launch alongside (appears to be Captains Pride), is normally used by the Canadian Food Inspection Agency, however the ship does not seem to be undergoing an Asian Gypsy Moth inspection. Those inspections are conducted on ships arriving in Canadian waters for the first time. This ship passed Montreal inbound to the Great Lakes May 5, and it loaded  grain in Thunder Bay, ON May 7, then apparently topped up in Port Cartier, QC May 15.

One of three sister ships in the Fednav fleet, it was built in 2017 by New Times Shipbuilding Co in Jiangjiang, China. It is a frequent visitor to the Great Lakes:
http://shipfax.blogspot.com/2019/01/federal-ruhr-ghostly-visitor.html

Arriving at The Cove is an unusual "houseboat" as it is termed by a certain classification society. Bold is clearly a luxury "super yacht" of 1551 gt, built in 2019 by Silver Yachts of Fremantle, Australia as Silver Loft and renamed shortly after delivery.
https://silveryachts.com/ 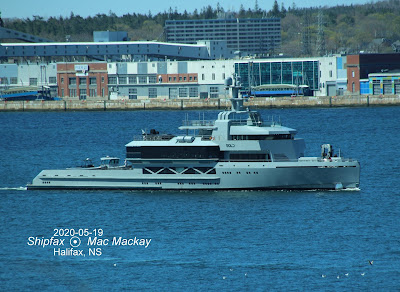 The vessel is moderately impressive looking, but all the publicity photos appear to have been taken with an extreme wide angle lens making it look much longer (and sleeker) than its actual 85 meters. With a weekly charter rate of 950,000 Euros (really!) I would expect something more like the pictures. The glassed in appendages projecting out from the sides of the superstructure would certainly pose many practicality problems, particularly in tying up at most wharves, passing through canal locks, etc..
The vessel is billed as economical to operate. It has very shallow draft and a range of 5,000 miles at 18 knots cruising speed and is capable of 23 or 24 knots for fast positioning.

Its last port was New York City but was in the Caribbean prior to that and in the Mediterranean last summer.