Another of Canada Steamship Line's versatile Trillium class ships arrived in Halifax this afternoon. Thunder Bay was built in 2012 by Chengxi Shipyard Co Ltd in Jiangyin, Jingsu, China. The 24,430gt, 34,433 dwt self-unloader was built to maximum St.Lawrence Seaway size. Although it sailed from China on its own hull, it required substantial temporary hull bracing for the trip. It was then restricted to Great Lakes and St.Lawrence service. 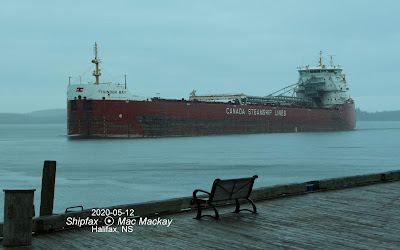 Now however some of the ships of the class have been upgraded to "Nova Scotia" specification, allowing them to make short sea voyages. So far that has included ports such as Saint John, NB, St.John's, NL and various regional ports such as Lower Cove, NL, Charlottetown and Summerside, PE. The Strait of Canso is another favoured destination to load aggregates. 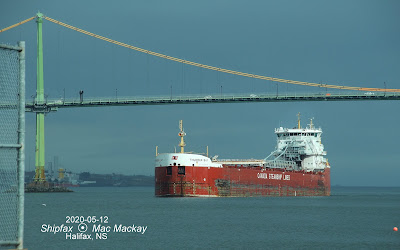 Typical Halifax weather-  the ship was into blazing sun by the time it passed the Macdonald bridge. 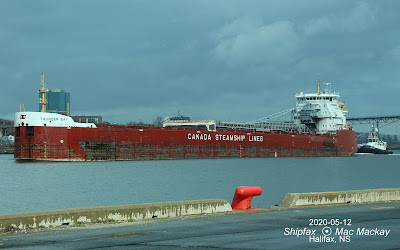 Once clear of the Narrows the ship was back into the gloom at Bedford Basin as it headed for National Gypsum to load.