Back to carrying the commodity it was built for Algoma Integrity took on a load of gypsum in Halifax and sailed for Baltimore this afternoon. 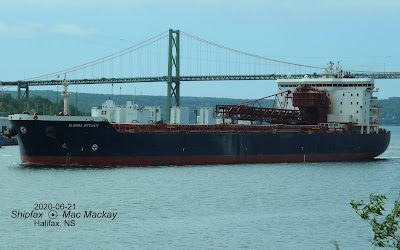 Built in 2009 by Ilha, Rio de Janeiro, the 33.047 gt, 47,761 dwt self-unloader was originally named Gypsum Integrity and designed to work for Gypsum Transportation Ltd out of Hantsport, NS. That work lasted only until 2011 when Fundy Gypsum closed its mine and loading facility.

The ship was redeployed to carry iron ore, coal and other commodities until 2015 when Algoma Central acquired the ship for the CSL Americas pool. The ship still carried a rust red hull colour for Algoma for some time, and I had not seen the ship since it finally received Algoma's deep blue paint.

The above photo in the Narrows did not capture the blue adequately, but another try in the lower harbour was a bit more successful.

There have been many previous references to this ship in this blog. See: http://shipfax.blogspot.com/search?q=algoma+integrity