This is an update to several items from blog posts over the past few days.

The new Super Post Panamax crane that arrived yesterday on the Zhen Hua 29 [qv] is still aboard the ship, but the installation crew will be at work arranging for the offloading. 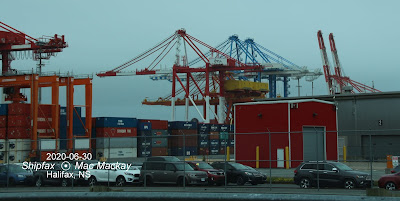 The new PSA crane appears considerably higher than those on shore.

The new crane will be moved off the ship's deck using a system of temporary rails that run onshore, taking into  account the state of the tide and with careful ballasting of the ship. The crane will then be resting on crib work on the dock. It can then be lowered onto its own dollies and permanent rails set into the dock surface.
There are several weeks of work required to load test and certify the crane for use. Unfortunately most of that activity will be invisible from shore.

Dominion Diving's Halmar stands by the stern of the ship.

Underwater work is still underway on the Seaways Hatteras [see yesterday's post]. I do not know the nature of the work, but divers can perform many different tasks these days that once required drydocking. Propeller repairs, hull cleaning and cathodic anode replacement are all now routinely performed while ships are still afloat. 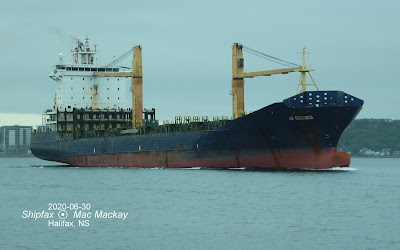 AS Federica sailed this evening for Saint John, NB to take up new duties for a CMA CGM Caribbean service.
Since coming off a ZIM charter in April, the ship had been idle in Halifax, then at anchor "Outside Port Limits" after proceeding (briefly) to international waters. It is my opinion that this maneuver was to allow the ship to use bonded stores that would have been sealed by Customs while in port.

On June 27 [qv] the ship moved into port, anchoring in Bedford Basin. Again this may have been to allow for inspection, survey or Customs clearance. Ships at anchor are charged a tariff if awaiting orders, awaiting sailing time, or at anchor for repairs or maintenance. There are also other fees and pilotage charges that apply to ships arriving and leaving port. However anchoring Outside Port Limits is free of charge.

Vole au Vent
The offshore wind turbine installation vessel Vole au Vent arrived early this morning and docked at the Woodside berth. It may have some equipment to pick up or drop off after completing operations off Virgina. 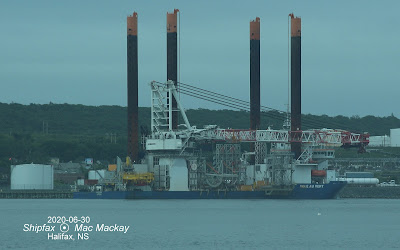 Late this morning the ship moved to the nearby Irving Oil dock in Woodside to take fuel. This move followed the unusual move of Irving Oil's tanker Acadian from the oil terminal to Imperial Oil #3 dock. 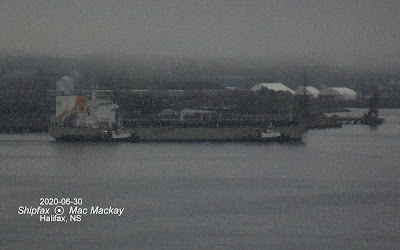 Due to fog and a dirty 11th floor window, and despite some photo editing, this is the best I could do to capture this event.