The Canadian flag tanker Algoterra arrived at Imperial Oil from Montreal on Thursday. After unloading at Imperial Dock 3, the ship moved this afternoon to Irving Oil Woodside, presumably for refueling. 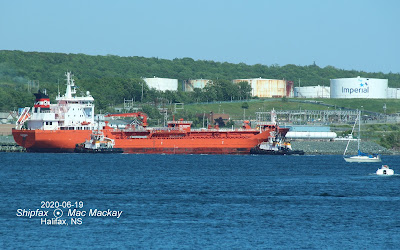 On a blazing hot (for Halifax) 31 degrees C afternoon, Algoterra made its way through pleasure craft from Imperial Oil to Irving Oil.

Algoma Tankers acquired the ship in March 2019 and it is still wearing the hull colours of its previous owners, Knutsen.  http://shipfax.blogspot.com/2019/04/algomas-latest-tanker.html

Meanwhile the Singapore flag Torm Agnes arrived at anchor this morning from Antwerp. Once the ship receives Canadian Food Inspection Agency clearance, the ship will move to Imperial Oil. 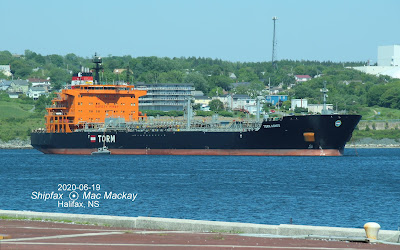 Torm Agnes at anchor with the Canadian Border Services Agency launch alongside.

Torm Agnes dates from 2011 when it was built by Guangzhou International. Tonnage figures have varied up and down over the years, but it is currently listed at 30,302 gt, 49,999 dwt. Torm A/S, based in Copenhagen, operates more than 100 tankers of all sizes, but the majority are MR (MidRange) like this one carrying clean fuels.

For the record, the Irving Oil dock was vacated late last night by Acadian, one of Irving Oil's two Canadian flag tankers, making its round of eastern Canada ports out of Saint John. (Sister ship East Coast is currently in Montreal.) 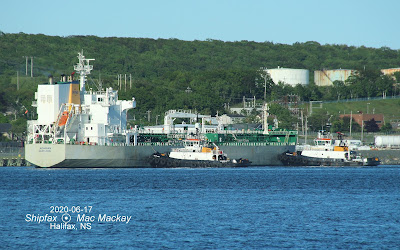