It is not usual for ships to change names these days (it was once thought to be unlucky) as names often follow a theme set by the owner. Ships are assets much like any other and can be bought and sold. So when owners change so often do the names. Nevertheless with ships in world wide trade it is perhaps unusual to see the same ship in a short space of time with three different names. 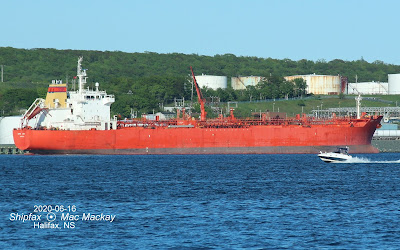 The MidRange tanker Cape Gavi is one such ship. It arrived at Irving Oil's Woodside dock today bearing its third name since 2018.

When I last saw it in April 2019 it was carrying the name Parsifal II and was under NSB Niederelbe management. See: http://shipfax.blogspot.com/2019/04/reflag-rename-and-reload.html

Since July in 2109 it has been managed by Columbia Ship Management (hence the CSB on the funnel) with owners listed as Partankers XII AS. Built as Conti Agulhas that was the name it carried on its first visit in April 2018. The ship dates from 2008 when it was built by Hyundai, Mipo.

This time the ship arrived from Saint John, NB with a partial load, likely from Europe. It apparently unloaded part of its cargo in Saint John and will discharge the rest here.

Irving Oil recently announced that they will be acquiring the Come-by-Chance, Newfoundland refinery owned by a US merchant bank. This will expand their ability to meet market demand here and on the US east coast, but it is unclear what if any effect it will have on Halifax tanker traffic.
.