The Wallenius Wilhelmsen auto carrier Tortugas arrived at Pier 31 yesterday to unload machinery. It spent the night there and completed cargo work this morning. 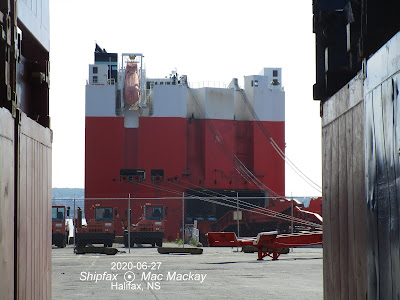 Seen through a space between containers at Pier 31, Tortugas is painted in a similar orange colour to the old Halterm yard tractors and skeleton trailers, now operated by PSA Halifax.

Founded in 1861 in Tonsberg, Norway, in sailing ship days, the Wilhelm Wilhelmsen Group's first steamship, bought in 1887 was the Talabot. Company lore has it that this ship was the first to make a profit, and therefore all subsequent ships have been given names starting with the letter "T". Still family owned, the company also operates American RoRo Carriers (ARCO), United European Car Carriers and EUKOR (majority owned by Wilhlemsem, Wallenius, with minority holders Hyundai and Kia). 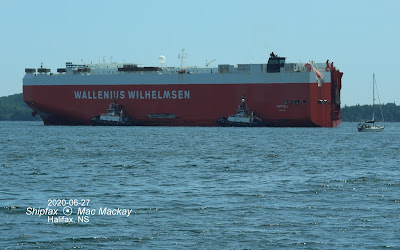 Tortugas with tug assistance, makes its way cross harbour from Pier 31 to Autoport. Many of its fleet mates have been repainted in new colours.

In 2017 the Swedish Wallenius Lines agreed with Wilhelmsen to merge their vehicle operations to form Wallenius Wilhemsen ASA. As ships cycle through their regular drydockings they are being repainted in new colours, and the traditional Wallenius white over green and Wilhelmsen white over orange are gradually disappearing. Since major drydockings take place on a five year basis, it will may be a few years yet before all ships are repainted.

Tortugas is shown remaining at Autoport until late Monday afternoon.