A ship giving the destination "Halifax OPL" has mystified me and other ship watchers, although it became obvious that it means that the ship is headed for the outer anchorages off Halifax. In fact it means "Outside Port Limits", a term well defined in maritime law and used in the wording of charters.

As of today two ships occupy that destination off Halifax. Technically they are not within the Port of Halifax, and thus not required to pay wharfage or other fees. They are also outside the pilotage limits. As long as they keep to the traffic control lanes and regulations, they are free to leave for sea without a pilot. 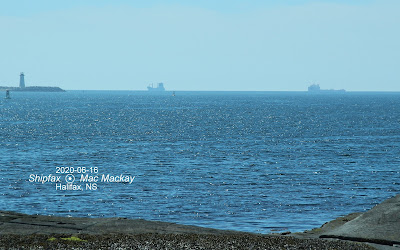 On the right in the photo is the Bigroll Beaufort. Having completed unloading wind turbine components at the Woodside dock, the ship may be doing crew work on deck, but does not need to be paying fees in port.

On the left of centre is the AS Federica which had been laid up in port since April before moving put to "OPL" in May. The ship was on a ZIM charter which has ended and likely is awaiting another assignment. When it left Halifax it went outside Canadian territorial waters, so it is still "at sea" legally, not having cleared Customs again in bound.