The tug BOA Odin arrived this morning towing the semi-submersible BOA Barge 34 and tied up at Pier 9 C.

The name BOA is well known in Halifax as the company's semi-submersible heavy lift barges and tugs have been here several times before. In fact BOA Barge 37 has been here for for several years on long term charter to Halifax Shipyard where it is used to float out he Arctic Offshore patrol ships. 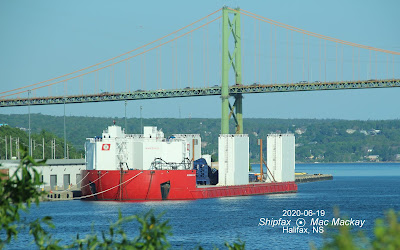 BOA Offshore AS was founded in 1975 by Ole T. Bjornevik of Trondheim, Norway, and the name is an acronym of the founder's initials. 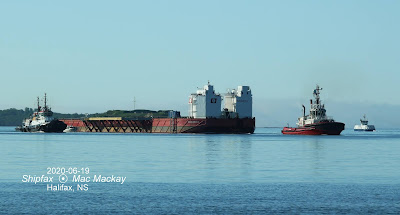 The barge and tug were not the only vessels arriving today with capitalized names. The container ship ZIM Shekou arrived at PSA Halifax on the ZIM Container Service Atlantic (ZCA) which runs from Mediterranean ports to Halifax and US east coast ports.

ZIM Shekou was built by Dalian New Shipbuilding in 2007. Its capacity is 4250 TEU and tonnages are currently listed as 39,906 gt, 52,629 dwt. Since 2018 the ship has been owned by Armada Shipping Corp and managed directly by ZIM.