The headline grabbing ship Yantian Express was all over the news when containers caught fire en route to Halifax January 3, 2019. After a nineteen day operation the fire was put out and the ship was sailed to Freeport, Bahamas where damaged containers were removed and it was cleaned up enough to get underway again. It arrived in Halifax in May 20, 2019 to unload containers. It then headed off to a Chinese shipyard for repairs, carrying about 1,000 empties for stability. 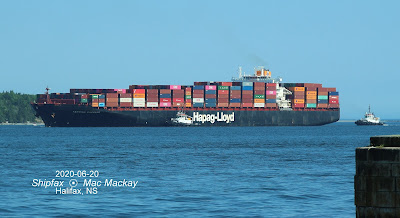 Following repairs to fire damage, the ship resumed trading in August 2019, returning to Halifax in January 2020. It arrived again today - just another ship perhaps. But taking a closer look reveals freshly repainted hatches, but no repainting to the hull. It is still streaked from fire fighting efforts.