Nirint Shipping B.V. maintains a regular service from Europe to Cuba, returning via Halifax. There are five ships on the run at present, but only four of then are scheduled for Halifax. Three of them are similar ships: Augusta Luna, Augusta Unity, and Augusta Sun. Mostly they arrive and sail under cover of darkness, so this mornings arrival of the latter ship for 10:00 at the pilot station allowed for a photo. They dock at pier 31 to unload nickel sulfides, making for difficult viewing. 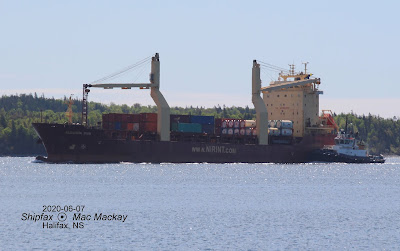 The tug Atlantic Willow has made fast alongside to assist the ship to berth at pier 31.

The ship was built in 2003 by New Century Shipyard in Jingjiang, China as Atlantic Progress. It has since carried the names 03: BBC Russia, 08: Federal Patriot, 10: HAL Patriot, 13: Atlantic Patriot, 17: Augusta Sun. It has called in Halifax under several of those names. 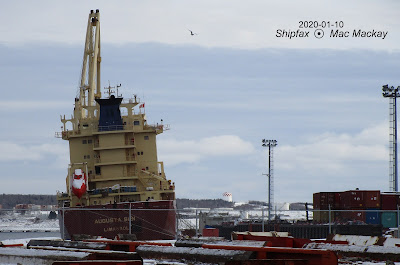 Augusta Sun at pier 31 in January.

Nirint has an excellent web site, with pdf spec sheets for each ship:
https://www.nirint.com/en/fleet
.