There were two Grimaldi ships in Halifax today, albeit briefly. As Atlantic Sail was inbound for Cerescorp's Fairview Cove terminal, Grande Baltimora was clearing Autoport for sea. 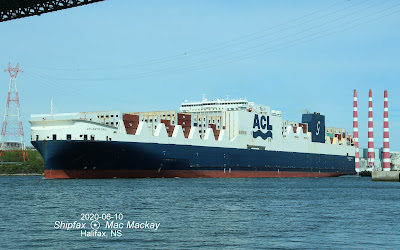 The tethered escort tug Atlantic Oak keeps Atlantic Sail  company as it approaches the MacKay bridge. Once the ship reaches Bedford Basin the tug will help the ship to turn to back into its berth. 1611 hrs

Atlantic Sail was arriving on the eastbound leg of its  transatlantic crossing for Atlantic Container Line (owned by the Grimaldi Group.) Built in 2016 in China it is one of five ships maintaining weekly calls eastward and westward for ACL. The ship will sail later for Liverpool, where it is registered. 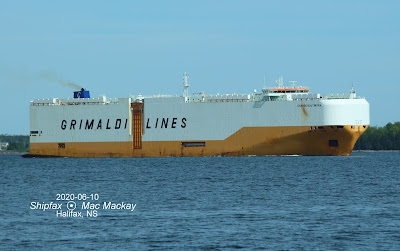 Grande Baltimora is rounding Ives Knoll on its way outbound from Eastern Passage for sea.
1636 hrs.

Built in 2017, also in China, and flying the Italian flag and with a capacity of 6700 cars, it works for Grimaldi Lines, but is owned by Grimaldi Euromed SpA a major car carrier and ferry operator in the Mediterranean. The ship is an occasional caller in Halifax.