Nearing the longest day of the year, there was still lots of light well into Friday evening, so it was possible to take in much more shipping activity.

The auto carrier Toscana moved from Autoport to Pier 31 to unload some machinery. Built by Mitsubishi, Nagasaki in 2009 the 61,328 gt, 22,250 dwt ship has a capacity of 6,354 cars. It has been repainted in the new Wilhelmsen colour scheme, replacing the traditional orange. 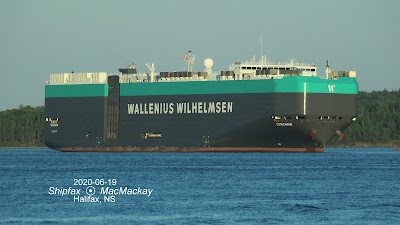 The Halifax Port Authority (HPA) has re-opened a section of the Pier 20 Seawall at the Seaport Market to pedestrians. This section has been closed as part of enhanced security for cruise ships after 9/11. With the cancellation of all cruise ship visits until October 31 (effectively wiping out the entire cruise ship season this year) the HPA is hoping to attract more visitors to their section of the waterfront. 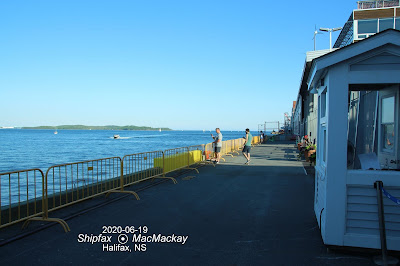 With chairs and benches, it is a pleasant and shady sport to spend some time, with a fine view of the harbour. The Seaport Market is also coming back to  life, with more vendors opening to supplement the order in and pickup scheme that has been in place during the lockdown. 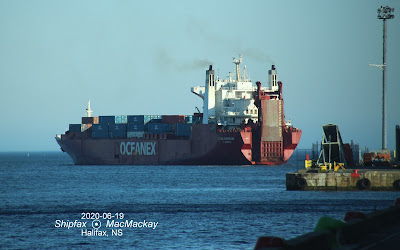 A gap in the fence allowed a shot of Oceanex Sanderling sailing for St.John's on its weekly service.

A section of the pier 20 shed was removed when the Seaport Market was built, so there is a gap in the buildings that used to line the entire length of the pier from Pier 20 to Pier 22. It was built to accommodate the largest passengers ships in the world at the time, and hosted the Cunard Queens and many others over the years. 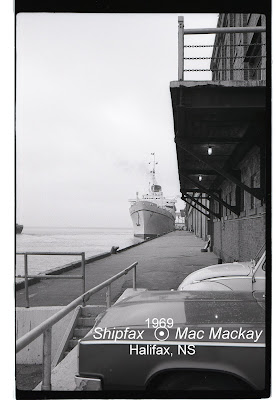 Among the last true passenger liners to dock at pier 21 was Cristoforo Columbo seen here in an undated 1969 photo taken from the extreme north end of pier 20. As you can see the pier was wide open, and immigrating passengers disembarked to the second level of the transit sheds, but there was a gangway at dock level too. The ship also carried cargo which was unloaded to dock level into the sheds.
(Today's photo was taken from a point just beyond the end of the overhanging balcony.)

There was lots more harbour activity this evening, but it mostly involved ships covered in the earlier post, I will sign off for now.