Those who follow Halifax harbour by means of AIS or satellite signal would be mystified by the presence of a ship identified as Griffon Rock tied up at Sackville Landing, giving as its destination "Frosty Bay". However when pressing the information button, up pops a picture of HMCS Kingston MM700. 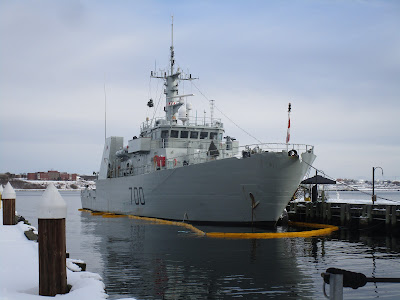 And indeed it is the Kingston tied up at what is the normal summer berth of ex HMCS Sackville. The Kingston is open to the public starting today and for this weekend as part of the waterfront's Evergreen Festival. Despite several inches of snow on the piers today, rain and mild temperartures are in the forecast for Saturday December 11. 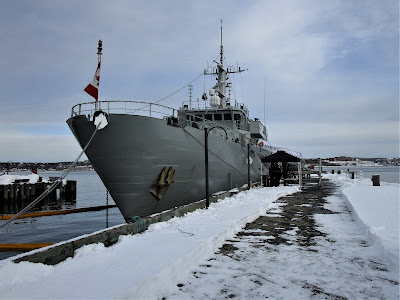 HMCS Kingston is the lead ship of the RCN's Maritime Coastal Defence Vessels. It was was built by Halifax Shipyards in 1995 and commissioned in 1996.

The bulk carrier Federal Swift arrived overnight and went to anchor in the lower harbour. 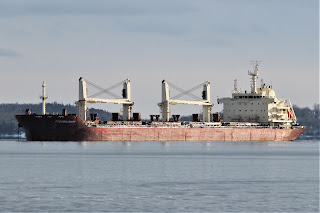 It is a "Handysize" ship of 24,196 gt, 37,140 dwt, built in 2012 by Zhejiang Ouhua Shipbuilding Co in Zhoushan, China and is equipped with four cranes of 30 tonnes capacity. Although registered in the Marshall Islands, it is owned by the Canadian Company Fednav through a subsidiary, Federal Cornwallis Ltd and is managed by Anglo-Eastern Ship Management, which is based in Hong Kong.


The ship's last port was Santos, Brazil, which is the largest port in South America, and a major sugar exporter. If it is carrying raw sugar the ship may be headed for Montreal or even Toronto with such a cargo. Fednav ships are major users of the St.Lawrence Seaway with four or five ships in the system at any one time, importing a variety of cargoes and usually carrying export grain outbound. 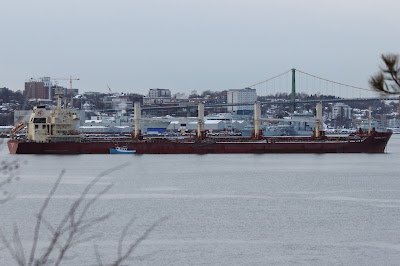 While at anchor the ship was joined by the launch Captain's Pride, which usually means that divers are working on the ship, likely hull cleaning or propellor tuning.

I imagine that the ship's crew will be pleased about the rain in forecast. It will relieve them of having to clear ice and snow from the deck and hatch covers. A couple of the crew can be seen on the hatch, in line with the gangway /pilot ladder, but they do not appear to be sweeping.