Heading in to the Christmas break, things were becoming quiet in Halifax harbour  today (December 24).

The Canadian flag tanker Acadian sailed at mid-day after a short visit to the Irving Oil terminal in Woodside, arriving mid-day yesterday. 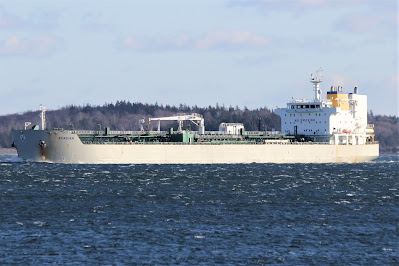 Acadian down to its (draft) marks, appeared to be fully loaded on arrival.

With its sister ship East Coast, the Acadian delivers refined petroleum products from Irving Oil's refinery in Saint John, NB to ports throughout eastern Canada and to the northeastern United States. Two more sister ships, the Great Eastern and New England under foreign flag, deliver product from Saint John to US ports only. A fifth near sister is also used (and maybe others). Irving Oil charters the ships from Iver Ships BV, the tanker arm of Vroon BV of Breda, Netherlands, through various intermediaries.

The ships were built in 2005 by Hyundai, Mipo. Acadian's tonnages are recorded at 23,356 gt, 37,515 dwt. All four were refited in 2015 with exhaust gas scrubbers. The apparatus is housed in a large white painted structure abaft the original funnel housing. Although doing nothing for the ships' appearances, scrubbers permit them to continue to use heavy fuel by washing harmful gases from the exhaust stream. (Acadian may have had its scrubber turned off when it sailed today as it was emitting a nasty brown smoke from its regular funnel. Some ships do use low sulphur diesel fuel while manoeuvering.) 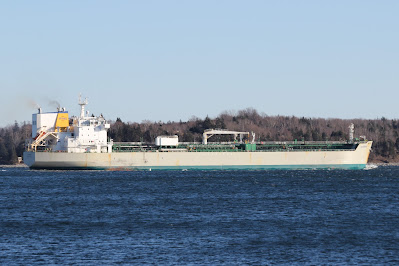 Acadian showing a little of its green boot topping as it sails this afternoon, giving Montreal as its destination.

Not to be left out, Imperial Oil is expecting the Canadian tanker Qikiqtaaluk W. late tonight, early tomorrow. Longshore services at Imperial Oil are provided by company employees, so the ship will not incur the high costs for holiday overtime.

There was very little other harbour activity as Oceanex Connaigra sailed from Autoport for St.John's. The container ship ZIM Monaco was alongside PSA Halifax and is was due to sail late this evening and will now sail December 26. It did not appear to be working this afternoon, as all the cranes were up. 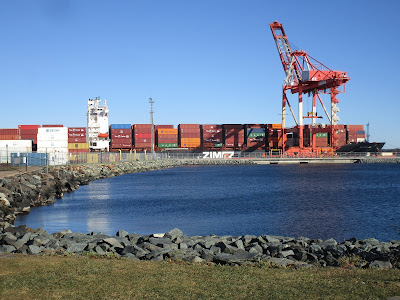 ZIM Monaco is on the ZCA service jointly with Hapag-Lloyd's AL7, from the Med to the North American east coast. The 40,030 gt, 50,775 dwt ship has a capacity of 4253 TEU, and was built in 2009 by Samsung Shipbuilding + Heavy Industries Co, in Koje (or Geoje) South Korea.
The only other commercial vessels in the port is are:
>The BBC Europe at Pier 9C with no ETD posted.[see previous post December 21] I suspect that with its deck load of expensive motor yachts it is waiting for a good weather window to make for Fort Lauderdale. It was windy again today and there is wind in the forecast for the next short term.
>The St-Pierre et Miquelon feeder  Nolhan Ava. The container RoRo ship arrived at Fairview Cove December 22 and will remain in port until after Christmas
.