With Oceanex Sanderling in the mid-Atlantic and with an ETA in Amsterdam of December 29 [not Rotterdam as previously reported] Oceanex's revised schedule is in force. The two ships that normally run between Montreal and St.John's will be taking turns running between St.John's and Halifax in order to maintain a weekly schedule while the Oceanex Sanderling is in refit. Today, December 23, Oceanex Connaigra arrived for the first time on this temporary arrangement. [It has been here before subbing for refits] 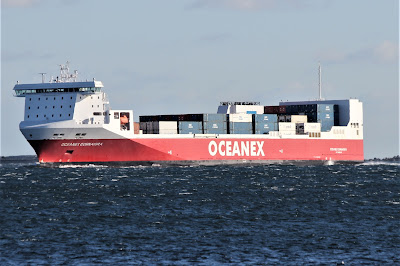 Although delayed for a few hours by very high winds in the harbour approaches this morning, Oceanex Connaigra made port this afternooon. Normally a Friday departure, Oceanex has also adjusted the schedule around Christmas holidays. The ship will move to Autoport and sail for St.John's tomorrow December 24. It will be at sea on December 25 and arrive in St.John's for work December 27, thus avoiding high overtime rates for longshore workers (and giving them time off of course.)

Built in 2013 by Flensburger Schiffbau - GmbH + Co KG in Germany Oceanex Connaigra is a 26,786 gt, 19,460 dwt ConRo vessel of modern standards for engine and hull efficiency, crew accommodation and comfort. Capable of 23 knots top speed it is fitted with anti-roll tanks and fin stabilizers. The ice class ship was also built to accommodate all sizes of shipping containers, including 53 ft long units which are usually confined to land on trucks and trains. It can carry 900 containers and 540 cars.

The refit for Oceanex Sanderling is expected to take about a month, which means at least two if not three calls by Oceanex Conaaigra. Fleet mate Oceanex Avalon is due next week.

I have amended the December 16 post on this subject. An observant reader was kind enough to send along an up to date roster of MARAD ships which continues to show Cape Texas (ex Reichenfels, an Oceanex Sanderling sister ship) still in existance. I had suggested that it might have been scrapped, but that is apparently not the case. As strategic assets, the ships of this class are kept in reserve and can be reactivated on short notice to deploy US military containers and trucks, tanks, etc, anywhere in the world.